April 6, 2017 - Most years start off with more demand than supply. 2017 was no different in style, but was rather larger in scope. ThomsonReuters LPC, S&P/LCD and LevFinInsights (LFI) all documented a primary loan market that was awash with liquidity – and thus inundated with repricings, reverse flex, falling spreads and softening structures. So, business as usual.

First, the stats. (Warning: Each shop has slightly different data collection methodologies and hence different statistics, but the trends generally align.) All agree that the quarter was dominated by repricing or refinancing activity. As the chart d 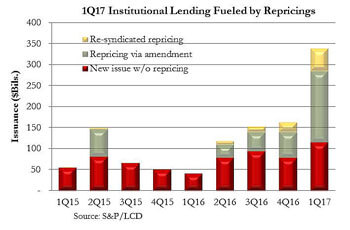 emonstrates, LCD tracked $170 billion repricings done via amendment and $225 billion of total repricings. All told, LFI calculated that more than one-quarter of outstanding loans repriced. At an average spread cut of 64 bps, this means the repricing wave took 16 bps off the average spread in their Index.

But all that repricing doesn’t mean there was no real new issue. In fact, LCD tracked $28 billion of LBO lending and $53 billion of non-LBO lending; all told this is up 24% from 1Q16. But, unfortunately, so were paydowns. The biggest example is Broadcom, with its $6.6 billion paydown, LFI commented. As a result, real supply was anemic: the S&P/LSTA Index bounced around the $876-881 billion context at quarter-end, leaving it basically flat relative to year-end 2016.

Demand, however, was anything but flat. As TR-LPC charted on slide 39 of its Leveraged Loan Monthly, after a slow start, CLO issuance topped $17 billion for the quarter, while loan mutual fund inflows added another $12 billion to demand. (SMA demand slowed a bit in the quarter, but remained solid, LFI added.) So, needless to say, spreads continued to fall. TR-LPC calculated that the average institutional yield was 4.46% in first quarter, hovering around 13-year lows. Moreover, 23 tranches cleared at LIB+200, some with step-downs to LIB+175, LFI noted.

But of course spreads weren’t the only casualty of the supply-demand imbalance. Structure continued to soften, with CovenantReview reporting that i) 82% of institutional loans were covenant lite, ii) 34% of non-repricing loans cleared with an MFN sunset, iii) “free-and-clear” dollar caps rose to 0.79x in first quarter, iv) soft-call carveouts abounded, and v) 31% of 1Q17 loans cleared with a ratio-based step-down for asset sale sweeps. Whew.

Clearly – and unlike a year ago – issuers held absolute power in 1Q17. But what does second quarter have on tap?  According to Slide 31 of TR-LPC’s 2Q17 Preview, 56% of poll respondents said the institutional calendar will remain the same, with a mix of M&A and refis. So, buckle up, 1Q17 trendlines might continue.