May 3, 2017 - Is the loan market regaining (some) balance?  Demand appeared marginally less rapacious, and supply was marginally more plentiful in April. Real new issuance, courtesy of large new-money deals like Micro Focus, Misys and Tempo Acquisition, brought real paper to the market, reported LevFinInsights. Indeed, net of repayments, outstandings in the S&P/LSTA Leveraged Loan Index increased by more than $9.5 billion, to $890 billion, by the end of April.

On the demand side, investor appetite remains robust, but has perhaps edged back from insatiable. At more than $10 billion, April CLO issuance technically posted the best month thus far this year. However, more than $2 billion of the total came courtesy of just one middle market CLO, which does not bring the same demand to the BSL market. Meanwhile, the rapid fall in CLO liability spreads ended in April. After hitting 12-month lows in March, new issue CLO liabilities – excluding AAA notes – widened 10-30 bps this month, according to Wells Fargo.

As a result, supply and demand were a bit better balanced, and the repricing wave slowed, dropping to $39 billion in April from nearly $80 billion per month in the first quarter, LFI calculated. Of course issuers were not exactly powerless. TR-LPC notes that their “Flex Factor” continues to strongly favor issuers, with 25 reverse-flexes against just three investor friendly changes. But at the end of the day, with more “real” new issue, and fewer repricings, spreads generally stabilized in April. According to LCD, all-in spreads ticked up roughly eight bps (to LIB+254) on BB/BB- institutional term loans and 13 bps (to LIB+410) on B+/B loans. 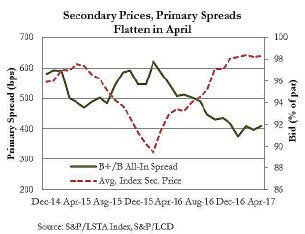 Still, as the nearby chart indicates, institutional loan spreads remain near post-crisis lows.  And that, in turn, continues to create problems for CLOs. Citi wrote that Weighted Averaged Spreads (WAS) in U.S. 2.0 CLOs slipped five bps to 367 bps,just seven bps above the WAS limit. Roughly 8% of CLOs are failing their WAS test and 20% have cushions of five bps or less. Falling loan spreads also are squeezing equity returns and are a major motivator for CLO refis and resets. All told, CLO refis topped $15 billion and resets topped $5 billion in April. How long can the refi/reset trend continue? Possibly a while. After seeing $60 billion of CLO refis this year, Wells Fargo calculates that – based eligibility under the Crescent No-Action Relief letter and CLO spread trends – another $55-60 billion of CLO refinancings could make sense through the end of 2018.