March 16, 2017 - Washington and Wall Street have been pondering tax reform plans – and now borrowers are doing so as well. Both the Trump and House Republican plans significantly reduce companies’ ability to deduct interest. For the loan market, there are (at least) two important impacts to consider. First, the impact on the companies themselves – i.e., whether the reforms make the companies more creditworthy. Second, how potential tax reforms impact companies’ demand for debt. Below, we review recent analysis on the impact of Trump and House Republican tax plans on U.S. companies, as well as how one company is preempting the issue.

This week, Moody’s published “Debt and Taxes”, which analyzes the impact of the tax reform proposals on both investment grade and speculative grade companies. The research focuses on the impact of i) a reduction of corporate taxes from 35% to 15% (Trump) or 20% (House), ii) the reduction/elimination of interest deductibility, iii) the immediate deduction of capex, iv) the import border adjustment, and v) the elimination of income taxes on exports and repatriation of foreign profits.

The first takeaway is that the tax rate reduction, full investment deductibility and more favorable foreign profit treatment will boost cash flow.  That said, investment grade companies – which are larger, more multinational and pay more tax– will fare better than speculative grade companies under the tax reform plans. In particular, the loss of interest deductibility for spec-grade companies is much more consequential – and may ultimately lead to higher overall tax burdens for a number of firms.

Moody’s analyzed the trade-off between a reduction in corporate taxes to 15% or 20% and the loss of interest deductibility for leveraged companies. The more interest a company pays – or, conversely, the lower its EBIT/interest ratio – the more the loss of interest deductibility affects it. As the chart indicates, if a company has EBIT/interest coverage of less than 2.33x, it pays more tax under the House plan that 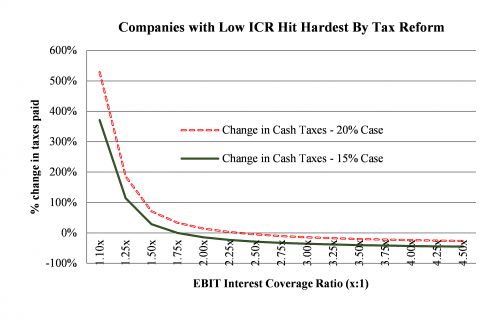 Considering the potential impact of the end of interest deductibility, it’s little surprise that companies may look to adapt their capital structures. For instance, ThomsonReuters LPC detailed how data center Cyxtera added protection against possible tax changes. The new $1.3 billion loan backing Cyxtera’s buyout includes an $815 million first lien loan and a $310 second lien loan.  The second lien loan is callable at 102 in year one and 101 in year two. Cyxtera, however, is asking for the ability to call its second lien loan at 101 in year one if the government removes interest deductibility.

The LSTA is continuing to watch the tax reform efforts and is engaging as appropriate. For more information, please contact mcoffey@lsta.org.

January 30, 2023
January 30, 2023
January 27, 2023
Who are the new Directors on the LSTA’s Board? LSTA Executive Director Lee Shaiman recaps the Annual Membership Meeting…and offers the big reveal (of the…
January 27, 2023
This week we cover 2022 Trading, Stat! Flood Insurance; Toward Sustainability!
January 25, 2023
According to the LSTA’s Ted Basta, “Secondary loan trading volume increased 6% in 2022, to a record $824B, despite a 20% decline in activity during…
January 25, 2023
The LSTA presents the results of the fourth quarter Secondary Trading & Settlement Study.
January 25, 2023
2022 Annual LSTA secondary loan trading volume increased 6%, to a record $824B. In comparison, Morningstar/LSTA Leveraged Loan Index outstandings expanded just 4%.
January 20, 2023
January 20, 2023 - Today the LSTA published the revised LSTA Market Standards for Flood Insurance Processes in Syndicated Lending (“Flood Standards”). By way of…
January 20, 2023
This has been published to offer guidance to loan market participants regarding the compliance obligations imposed by the Flood Laws solely with respect to syndicated…
January 20, 2023
This week we cover LIBOR LAST Act (Act Now!); Next Gen Settlement Tools; Are Loans Securities (Again!)