March 30, 2017 - Bloomberg observed an interesting phenomenon this week: The Fed’s Commercial and Industrial (C&I) lending stats dropped sharply recently – and no one knows why. Below, we discuss Bloomberg’s findings, contrast them with today’s leveraged loan market, and hazard a guess about what tomorrow might bring.

In an article titled “Sluggish Bank Lending Is the New Focal Point for a Trump Reality Check”, Bloomberg observes that there has been a significant deceleration in outstanding loans made to companies. In fact, according to Bloomberg’s first (and rather startling) chart, C&I lending dropped sharply in late February before recovering somewhat in March.

So, what is happening? Various commentators propose various theories. Some point to regulator scrutiny on underwriting standards; others theorize that a shortage of workers is slowing business expansion (and thus demand for credit); some say oil price declines are reducing borrower demand; still others point to a strong bond market disintermediating loans; a few contrarians suggest that loans have been souring on banks books and may be heralding a retrenchment and downturn.

But many observers return to the idea that today’s lower C&I loan volumes reflect last year’s slowing economic conditions; meanwhile, companies have not yet translated their new optimism on growth to greater appetite for loans.

Certainly we’ve seen that trend in the leveraged loan market – and observed the ramifications in terms and conditions. Later this week and early next week, ThomsonReuters LPC, S&P/LCD and LevFinInsights will review first quarter metrics and tone. But even without final numbers, we can say definitively that any stagnation in lending is not due to lender disinterest. All told, an early read from LCD is that institutional loan issuance hit $150 billion in first quarter – the highest quarter on record (just barely) – and overall leveraged loan issuance was $182 billion.

But, of course, much of this was repricing/refinancing activity.  Actual new syndicated repricings totaled $51 billion, and there was another $152 billion repricings via amendment. Even with improving M&A/LBO lending, this means that the nominal issuance figures vastly outstripped actual loan supply.  Case in point: Thanks to modest “real” new issue and a glut of pay-downs, as of March 29th, outstandings in the S&P/LSTA Leveraged Loan Index are up less than $1 billion from year-end 2016. (Indeed, this echoes the C&I numbers that Bloomberg cites.)

The limited new supply – overwhelmed by demand from loan mutual funds and reviving CLOs – has led to the usual agony of flexing deals and falling yields. This week, TR-LPC charted their “flex factor” which, at -0.6, very much favored issuers in first quarter. All told, they tracked 106 reverse flexes against 30 upward flexes. And, of course, with repricings and reverse flexings, primary market yields are tumbling. How far? TR-LPC adds that, at 4.64%, 1Q17 primary market yields are at their lowest level since 2004(!). 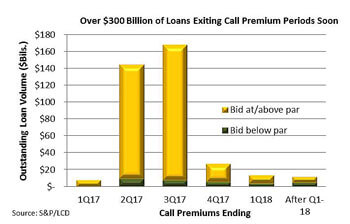 So, are things set to change? Yes – and possibly for the worse, LCD intimates. Assuming the supply-demand dynamic doesn’t change, second and third quarter also could see a raft of painful repricings.  As the nearby chart demonstrates, there is over $300 billion of loans that see their call premiums expiring in the coming quarters. And these guys may be well positioned to reprice: All but $17 billion of the loans were priced at or above par in the secondary market.