March 9, 2017 - After breaking records (and investors’ hearts) in January, the leveraged loan market settled somewhat in February. In turn, the rapid spread deterioration – or improvement, depending on one’s world view – slowed. Below, we run through the numbers that defined February.

First off, January’s record rate of repricings slowed to a merely frenetic pace. After tracking $111 billion in January, LevFinInsights lastweek noted that repricing activity dropped nearly 50% to a still-remarkable $58 billion in February. But don’t let the shrinking topline volume distract you. In fact, fewer refis and more new issuance actually allowed the market to grow. After contracting by $8 billion (to $872.4 billion) in January, the S&P/LSTA Leveraged Loan Index increased by $2.4 billion (to $874.8 billion) in February. And the first few days of March are trending positively:  As of Tuesday, March 7th, outstandings were up another $3.8 billion.

While the supply of loans increased in February, it was more than counterbalanced by strong investor demand. After seeing less than $1 billion of issuance in January, CLOs turned on the jets in February, pricing 16 deals totaling $8.5 billion, LCD wrote. (And the new issue market wasn’t even where most of the action was. In February, a whopping $16 billion of CLOs were refinanced, mostly courtesy of the Crescent No Action Relief Letter.) Meanwhile, loan mutual funds saw continued inflows. Based on funds that had reported through the end of last week, ThomsonReuters LPC and Lipper tracked $3.3 billion of reported inflows in February, on top of $4.5 billion in January.

But even with strong demand, spread pressures abated somewhat. As both LCD and TR-LPC noted, price flexes still moved in favor of issuers – just not as much. TR-LPC’s “Flex Factor”, in which a negative number reflects issuer-friendly flex trends, eased from negative 1 in January to negative 0.1 in February. 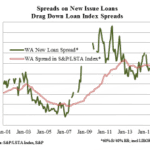 The repricing trend also has impacted yield statistics of both new issue and outstanding loans, as demonstrated by the related chart.  In the chart, the weighted average new issue spread is comprised of 40% BB/BB- loans and 60% B+/B loans. As new issue spreads move up or down, they pull the average spread on the S&P/LSTA Leveraged Loan Index along with them. However, because the Index is so much larger than new issuance, the impact on the average spread on outstanding loans is i) muted and ii) lagged. As the chart indicates, new issue loan spreads (including LIBOR floor benefit, but excluding amortized OID) peaked at LIB+625 in September 2011. In contrast, Index loan spreads (including LIBOR floor benefit, but excluding discount) peaked at LIB+467 in January 2013. Likewise, as the chart indicates, new issue loan spreads have fallen 141 bps since their highs last February; Index loan spreads, meanwhile, have contracted “only” 47 bps. So, while the weighted average spread of new issue loans bottomed around LIB+319 in January, Index loan spreads still hover near LIB+400.

Interestingly – perhaps – the spreads trends might begin to diverge. As repricings were replaced with new loans, including LBOs and recaps, in February, new issue spreads actually widened by more than 20 bps. However, because these new issue spreads remain materially below those of outstanding loans, spreads on Index loans will likely continue to trend lower in the coming months.  We will watch how this evolving trend affects the investor base, particularly CLOs.