April 20, 2017 - Recent statistics suggest both a flattening and a substantial increase in leverage in the last quarter. While that does not seem possible, when one teases through the data, it appears that – like the famous cat – both states may exist simultaneously.  We drill down below.

The issue of whether leverage has been rising materially has been perplexing us for the past week. The confusion kicked off when, in its quarterly review, S&P/LCD calculated (off 26 deals) that 3.8% of first quarter LBO loans were levered over 7x, slightly down from the 4.1% (off 74 deals) tracked in 2016. This would indicate that leverage was flattish. But then ThomsonReuters LPC reported that the share of highly leveraged deals was increasing. In fact, TR-LPC reported that one-third of buyout loans were levered over 7x; they added that 40% and 53% of LBO loans hit this leverage bogey in 2014 and 2007, respectively.

The larger EBITDA adjustments mean that the gap between reported leverage and adjusted leverage would widen as well. The nearby chart shows the average total  leverage (based on adjusted EBITDA) on sponsored M&A loans 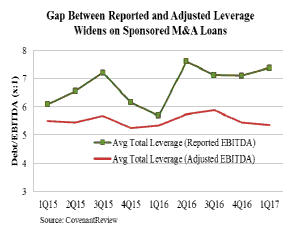 But which are the “right” leverage numbers? Again, the answer may be an unsatisfying “both”. The reported leverage show the level on a look-back basis, which is of course very valuable. But buyers buy companies to improve them. They often have specific and tangible plans to improve EBITDA, such as closing a money-losing line or factory. EBITDA adjustments such as these are very legitimate, so they shouldn’t automatically be tossed out. At the end of the day, both sets of numbers provide insight. This cat’s state remains ambiguous.

October 5, 2022
Anyway you slice it, 3Q22 did not end well. Lending volumes were down and interest costs were up.
October 5, 2022
October 5, 2022
October 4, 2022
October 4, 2022
October 4, 2022
The LSTA, the trade association for the corporate loan market in the United States, has promoted of three legal executives to pave the way for increased…
October 3, 2022
Please find attached the September 2022 LSTA/Refinitiv Mark-to-Market Pricing File.
October 3, 2022
Please find attached the 3Q 2022 LSTA/Refinitiv Mark-to-Market Pricing File.
September 30, 2022
This week we cover Secondary Eye (of the Storm?); CLOs - Pondering Futures; Revlon En Banc; Advisory!
September 29, 2022
We had previously riddled the question: How could CLO AAA spreads and CLO issuance both be around record levels. Well, riddle this no more.