This spring, Congress passed the LIBOR Act, which was intended to create a clear and uniform process for touch legacy contracts – those lacking workable LIBOR fallback language – to transition to replacement rates. In July, the Federal Reserve released a proposal to implement the LIBOR Act. While business loans typically have some form of fallback language and generally were not in scope of the legislation, the LIBOR Act and the Federal Reserve’s Rulemaking could impact some loan agreements. In this webcast, we will: 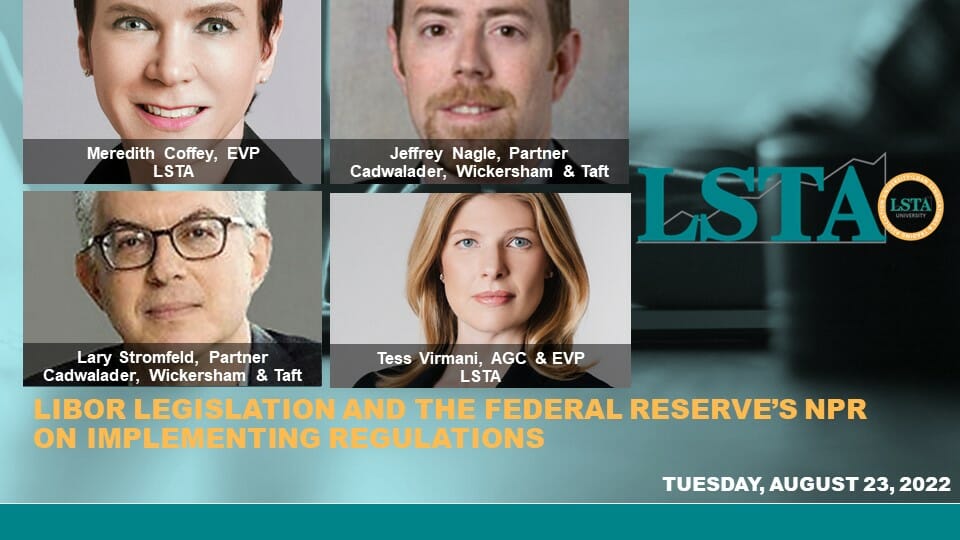 August 16, 2022
August 15, 2022
August 15, 2022
August 12, 2022
This week we cover You are an ESG Fund; Hot LIBOR Issues; The Supreme Court & Loans
August 11, 2022
On August 9th the LSTA hosted George B. Raine, partner at Ropes & Gray, for a webcast titled “Don’t Think You Are an ESG Fund?…
August 10, 2022
August 10, 2022 - The good news on LIBOR transition is that corporate loan market has largely stopped originating new loans on LIBOR and nearly…
August 9, 2022
With less than 15% of outstanding US leveraged loans on SOFR, LIBOR remediation is moving more slowly than most folks would like. The LSTA’s Meredith…
August 9, 2022
Secondary loan prices rebounded strongly in the second half of July, joining other risk assets in a mid-summer rally.
August 9, 2022
This podcast features Mark Mothner, Commercial Director of ICE Benchmark Administration, introducing ICE Term SOFR.
August 9, 2022
The SEC has proposed new rules requiring ESG disclosures by registered funds, BDCs and registered investment advisers. The SEC’s stated goal in proposing the new…