January 11, 2018 - As of Thursday mid-day, the U.S. CLO market continued to await its first new deal of 2018. There is in fact a large pipeline of new CLOs, but they are competing against a number of resets trying to get done by the January payment date, LCD noted. Happily, this respite gives us time to reflect on 2017, recap the major trends, contemplate the evolution (or revolution) in the CLO market and consider what may be on tap for 2018 and beyond.

Much to everyone’s surprise, in the wake of risk retention going live at the end of 2016, 2017 saw $118 billion of new CLO issuance from 212 deals – the second highest year on record. It was also – by far – a record year for refis ($105 billion from 240 deals) and resets ($62 billion from 125 deals), according to JPM research. All told, 99 U.S. CLO managers issued deals; this included eight new BSL managers and four new MM managers, Wells Fargo added. Thus, instead of throttling the market, risk retention fundraising had the effect of driving deal activity forward. (Our manager friends do note that, volumes notwithstanding, risk retention is incredibly burdensome and retention capital is extremely expensive.)

So, who arranged all these 2017 deals? According to TR-LPC League Tables, Citi led the U.S. new CLO issuance with 30 deals and nearly $18 billion, while Morgan Stanley, BAML, Wells and JPM rounded out the top five. On the reset front, it was Citi again with 27 deals and $13.7 billion, with JPM, Wells, Jefferies and BAML following. Refis changed the top slot, with Morgan Stanley leading ($19 billion from 44 refis), followed by Citi, CS, BAML and JPM.

And who will be managing all these deals? For new deals, new manager CBAM took the top slot with four new CLOs totaling a whopping $5.1 billion. (CBAM doesn’t do small.) GSO Blackstone ($4.4 billion via six deals), CIFC ($3.65 billion via five deals), Ares ($3.48 billion in five deals) and Antares ($3.32 billion in two deals) rounded out the top five. When they weren’t doing new deals, managers were busy reducing CLO liability costs via refis or resets. According to TR-LPC data, CSAM led the pack, refinancing or resetting 11 deals, while Octagon and CIFC tied for second by redoing 10 deals apiece.

Of course, the reason that CLOs were repricing and/or resetting was because i) they could and ii) falling loan spreads meant they needed to reduce liabilities costs to keep the arbitrage working. Wells calculated that the weighted average CLO spread dropped 31 bps during 2017. Without refinancings (which simply reduce spread) and resets (which reduce spread, extend tenor and can reset tests), economics on existing CLOs simply might not work.

In the first half of 2017, managers focused on refinancings (a whopping $90 billion of them!). This is because CLOs issued prior to December 2014 could be refinanced once under the Crescent no-action relief letter without retaining risk. Once the universe of Crescent-refinanceable CLOs was depleted, the market started doing more resets. In fact, 71% of 2017’s reset activity emerged in the second half of the year, Wells added.

So the 2017 CLO market was defined by falling spreads on assets and liabilities, very high new issuance and record-shattering refi and reset activity. But what is on tap for 2018? TR-LPC  is looking for more of the same, while CLO watchers are a bit more circumspect. Analysts are forecasting new 2018 CLO issuance in the $100-115 billion context, down marginally from 2017 levels. Respondents to the JPM CLO Client Survey were slightly less bullish still: The average new issue volume forecast was $97 billion. The reason estimates aren’t higher is that folks simply don’t know whether there will be enough loan collateral to support more new CLO formation, JPM added.

It’s a different story on refis and resets. In 2017, there was around $170 billion of refi and reset activity; analysts expect this to halve in 2018. (See the LSTA Chart of the Week.) 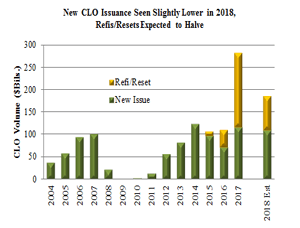 Why the drop? Obviously, Crescent refis have been tapped out, so that’s unlikely to drive a refi flurry like we saw in the first half of 2017. So where does the volume come from? Deutsche quantified the universe available to be refinanced or reset. CLOs that have been refinanced once often have terms in the agreement prohibiting additional refinancing. But there are $110 billion of 2015 and 2016 CLOs that will have exited their non-call periods and have not yet refinanced or reset. Deutsche estimates that $60-70 billion of these deals likely will do so in the coming year.

The creativity around refis and resets seen in the past year also may be prologue to the future. Citi analyzed the value of i) having a longer reinvestment period (a trend also seen in 2017) vs. ii) the value of a shorter non-call period. Citi concludes that there’s more economic benefit to the CLO equity in having a shorter non-call period – and adds that perhaps the typical two-year non-call period will contract further.  What all this suggests is that CLO structure may be evolving. Ultimately, Wells concluded that we may be seeing the development of a new lifecycle for CLOs: i) issuance, ii) refinancing after the non-call expires and then iii) a reset as the end of reinvestment nears.