Home / News & Resources / News / CLOsing Out the Year in Style

November 30, 2017 - After we all feared that risk retention would materially hamstring the CLO market, 2017 has gone in a rather different direction. In fact, with several work weeks remaining this year, new 2017 U.S. CLO issuance has hit $107 billion, edging past 2007 to become the second most active year on record. And that’s just if one considers new issuance. Add a record amount of refinancings and resets, and total “activity” jumps to more than $250 billion. And it is still going strong. S&P/LCD notes that the deals are being added to the pipeline on both sides of the Atlantic.

Not bad for a market that anticipated a 30% slowdown thanks to risk retention. In fact, a number of commentators point to risk retention as a factor in this year’s rebounding CLO issuance. First, managers spent years finding new permanent risk retention capital sources (who might not have otherwise invested in CLOs). Next, with 60% of new CLOs retaining risk via horizontal strips, suddenly there was less CLO equity available to third party investors (making them eager to participate in new deals). Meanwhile, the global search for yield drove strong demand in the debt tranches. As a result, even with near-record issuance, CLO tranche spreads fell to post-crisis lows.

So what is on tap for 2018? CLO analysts uniformly see strong volume stats. As the LSTA Chart of the Week indicates, 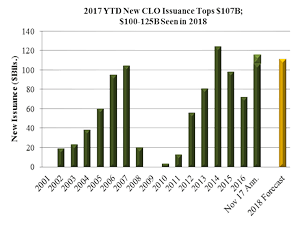 the average 2018 new CLO issuance forecast is in the $111 billion context. This ranges from $100 billion (Morgan Stanley) on the low end to $125 billion (Wells Fargo) on the high end.

But, like this year, the action doesn’t stop with new issuance. With non-call periods on the 2015/2016 CLO vintages ending and the 2014 cohort exiting their reinvestment periods, there may be very strong interest in refinancings and resets. In fact, Deutsche Bank and JPM see another $70 billion in refis/resets, while BAML and Morgan Stanley see them climbing as high as $100 billion. And, Wells and Citi conclude, if risk retention goes away, refi/reset volumes may climb further as smaller managers likely become more active.

February 1, 2023
February 1, 2023
It’s Baaack! After more than 11 years, the SEC recently reproposed a complex rule on Securitization Conflicts. Elliot Ganz offers some initial observations. Hint: The…
February 1, 2023
February 1, 2023
January 31, 2023
This edition of Loans Magazine provides members with valuable content on the latest developments in and around the loan market. It begins with Lee Shaiman’s…
January 27, 2023
Who are the new Directors on the LSTA’s Board? LSTA Executive Director Lee Shaiman recaps the Annual Membership Meeting…and offers the big reveal (of the…
January 27, 2023
This week we cover 2022 Trading, Stat! Flood Insurance; Toward Sustainability!
January 25, 2023
According to the LSTA’s Ted Basta, “Secondary loan trading volume increased 6% in 2022, to a record $824B, despite a 20% decline in activity during…
January 25, 2023
The LSTA presents the results of the fourth quarter Secondary Trading & Settlement Study.
January 25, 2023
2022 Annual LSTA secondary loan trading volume increased 6%, to a record $824B. In comparison, Morningstar/LSTA Leveraged Loan Index outstandings expanded just 4%.