November 9, 2017 - Defaults are low. Demand is high. And power currently is in the hands of borrowers. In light of this power imbalance – and consequent deterioration in terms – what worries disenfranchised lenders most? Documentation. When surveyed at the LSTA Conference, 53% of respondents said “Loose Documentation” is their biggest concern.

One reason that docs (and other terms) are under stress is that, at a high level, credit looks pretty solid today. As the LSTA Chart of the Week illustrates, 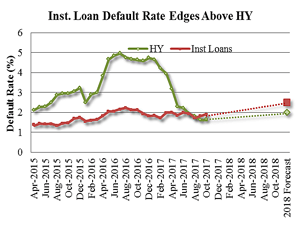 loan defaults sit just below 2% – and well below their long-run average. HY bond default rates, meanwhile, have dropped sharply from their 2016 oil-rout peaks. In fact, at this point – and through 2018 – Fitch sees loan default rates above high yield bond default rates. Why? In a word: Retail. The institutional loan retail universe is nearly $20 billion larger than high yield, and should produce twice the amount of defaults next year.

But, as Xtract and Covenant Review demonstrate, those future retail threats sure aren’t shoring up loan docs today. First up is Xtract, who divided 103 3Q17 credit agreements into deals of $350 million or more (“BSL sponsored”), sponsored deals under $350 million (“middle market”) and non-sponsored deals over $350 million (“BSL non-sponsored”). Several trends emerge. To begin, after 2Q17 saw BSL loan terms move into the MM sponsored deals, 3Q17 saw a partial rollback of this trend. However, the story was different in the BSL market. First, sponsors consolidated the gains they made in 2Q17. Second, non-sponsored BSL structures continue to be more conservative than sponsored deals, but they also have been incorporating more permissive sponsor terms. So what should one watch?

Incrementals: The free-and-clear movement is, um, growing. In the last 12 months, 49% of BSL sponsors that had incrementals had a grower formulation (i.e., the incremental debt basket was not fixed, but could “grow” by a certain percent of EBITDA), said Xtract. The growers drop off sharply for middle market sponsors (39%) and non-sponsors (10%). That said, the trend is up for everyone. In third quarter, 67% of BSL sponsors, 65% of middle market sponsors and 23% of non-sponsors enjoyed growers.

Covenant Review, meanwhile, extended a similar analysis into October – with roughly the same conclusions. Covenant Review looks primarily at M&A deals and then divides the world into large sponsors and middle market sponsors. (Large sponsors are the usual suspects like KKR, Blackstone, Carlyle and Apollo. Mid-sized sponsors include the likes of Madison Capital.) While the trends are similar to those seen by Xtract, the gaps are even wider. In the three months through October, Covenant Review sees 58% of their loans enjoying grower baskets. When it comes to securing growers, big sponsors have the lead with growers in 78% of their deals, mid-sized sponsors trail with 55%, and non-sponsors are barely in this game with just 19% having growers. So how much can growers grow? 76% of growers were pegged at 1x EBITDA. (Need to brush up on your lingo? Covenant Review/LevFinInsights published a helpful little cheat sheet.)

MFN: MFN language also was increasingly favorable in recent months. According to Covenant Review, 20% of the loans issued in the three months through October sported MFN sunsets. (Once again, size matters: large sponsors had sunsets on 30% of their deals vs. 12% for the mid-sized sponsors.) That said, Covenant Review also reports that MFN sunsets are the term that is most likely to be dropped when investors push back.