Why Reference “Compounded SOFR in Arrears” in the Concept Credit Agreement?

As we know, LIBOR is a forward-looking rate so it is known at the beginning of the interest period or “in advance.” By contrast, Compounded SOFR in Arrears is a rate that is not known until toward the end of the interest period. While this is a dramatic shift from the way loans, systems and credit agreements work today, Compounded SOFR in Arrears is the rate referenced by many SOFR floating rate notes, the first cash products to reference SOFR, as well as the designated fallback rate for USD LIBOR derivatives that will be incorporated into ISDA standard definitions next year.  Moreover, it is the rate that both gives lenders the time value of money for their loans as well as being the most accurate average SOFR rate because the observation period for the rate more closely matches the interest period for which the rate is being determined.  Remember, as the official sector has warned, a forward-looking term SOFR reference rate may not be available by the end of 2021.  See here for an update on forward-looking term SOFR reference rates. For these reasons, the LSTA has developed this concept document. 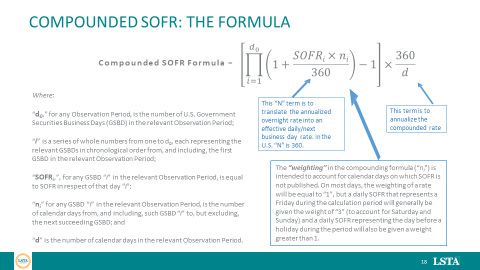 Another point to highlight is with respect to “SOFR floors.” For operational reasons, this concept document provides for a floor in the definition of “SOFR” (i.e., the daily rate that is used in calculating the compounded average of SOFRs) rather than in the definition of “Compounded SOFR” itself. This proposal is informed by conversations in the ARRC Operations WG, but we acknowledge that it would be a change in practice to how floors are applied to LIBOR today and could possibly present challenges if Compounded SOFR is calculated using a SOFR index.

It is important to note that the formula for “Compounded SOFR” that is included in the concept credit agreement only functions if the subject principal amount remains constant and, in the case of a repayment, interest is paid together with the repaid principal. While this is true of how LIBOR-referencing credit agreements are generally drafted today, readers should be aware of the specific function these mechanism play in the SOFR credit agreement. Each SOFR Borrowing having the same Interest Period (including any newly borrowed incremental loans) would have an independent calculation of their interest rate. Finally, because the concept credit agreement does not include a breakfunding mechanism (see below), the obligation to prepay interest could also serve as a lender protection against borrower repayment.

In conversations with market participants, we have heard a general assumption that new SOFR term loans would be structured as simply referencing a SOFR variant plus the applicable margin, and would not include a spread adjustment intended to make the SOFR rate comparable with LIBOR on a go forward basis. (Note that this is in contrast to LIBOR-based loans that are falling back to SOFR, where the spread adjustment is designed to make the all-in rate of the loan comparable after the transition until the credit agreement terminates.)  The concept document was developed on this assumption and no spread adjustment is included. Also, given that SOFR, a broad treasury repo rate, may not be reflective of lenders’ cost of funds, “cost plus funding” (or “match funding”) provisions may no longer be applicable. Those provisions customarily in LIBOR-based loans, such as market disruption and breakfunding, have not been included in the concept document. With respect to breakfunding, it is important to remember not only that match funding is likely not applicable for SOFR-based loans, but also that Compounded SOFR in Arrears is just a compounded average of daily SOFR rates so it is difficult to translate many of today’s LIBOR breakfunding provisions into similar provisions for Compounded SOFR in Arrears. With respect to the market disruption provisions, the concept credit agreement’s provision covers the situation where Compounded SOFR cannot be determined, but not the situation where Compounded SOFR is determined to not adequately reflect lenders’ cost of funds.

If this exercise has taught us anything, it is that nothing is certain. Therefore, the concept document includes robust fallback language if Compounded SOFR in Arrears would no longer be available as a reference benchmark. In drafting this fallback language, we have modified the ARRC’s recommended “amendment approach” fallback language to apply its streamlined amendment process to a future transition away from SOFR.

As our members undertake their review, readers are encouraged to keep in mind that this concept document does not purport to represent or set any standard market practice. It has been developed simply as a tool to further familiarize market participants with replacement benchmark alternatives, in this case Compounded SOFR in Arrears, which will hopefully further assist each institution with its own transition planning. We have opened a formal comment period and are kindly requesting written feedback by COB on Friday, January 17th. In putting together that feedback, we encourage you to include feedback from the business, legal and operations functions at your institution.

For your ease of reference, please find here a blackline against the draft LIBOR-based investment grade term loan being reviewed by the Primary Market Committee which shows the cumulative changes made to convert a LIBOR-referencing term loan credit agreement into one referencing Compounded SOFR in Arrears. For questions on the concept credit agreement, please contact Tess Virmani.