September 14, 2017 - After seven months of issuer friendly technicals, real supply has come on line materially. But, even so, this new supply may not be enough to absorb very considerable demand. We discuss these trends below.

On the supply side, the nominal volume stats have appeared extraordinarily robust all year. Through August, ThomsonReuters LPC tracked more than $600 billion of institutional lending, up from $222 billion in the same period last year. S&P/LCD has tallied $381 billion through September 12, 2017, up 89% from 2016. (The two companies use different data collection processes – like league tables – and thus capture different volumes.)

But little of this is accretive. According to TR-LPC, 70% of year-to-date leveraged lending activity has been refinancing. More specifically, S&P/LCD has tracked $398 billion of repricing activity, through both amendments and resyndicated deals. And so, all those eye-catching headline figures have come to nearly naught when it comes to supply.

Until recently. The LSTA Chart of the Week shows the real loan supply in the form of S&P/LSTA Leveraged Loan Index outstandings. 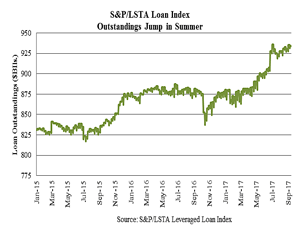 In May, priced outstandings hovered around $900 billion. Now they are comfortably above $925 billion. And the calendar is looking good. LCD reported that the net institutional forward calendar rose to $39 billion on Wednesday, up nearly $9 billion from the previous week. Likewise, according to the LSTA Board Survey, sellside M&A pipelines are running 10% above typical September levels.

So, supply is looking better. But is it enough? While loan mutual funds saw nearly $500 million of outflows in August, the $12 billion of CLO issuance more than made up the difference. In fact, August was the second best month of CLO formation this year.  All told, CLO issuance and loan mutual fund inflows have approached $90 billion this year. (And that doesn’t include the strong – but unmeasurable – growth of SMA money.)

Thus, even with a softer tone out of loan mutual funds and better supply coming on line, the market remains very favorable for issuers. Cases in point? On Wednesday, LCD reported that more than $14 billion of repricings have hit market thus far in September.  BB+/Ba1 Allison Transmission headlined the trend by reducing its spread to LIB+175, a level more reminiscent of 2007 than 2017. Meanwhile, LevFinInsights reported that at least seven transactions reverse-flexed on Wednesday.

So, any chance this turns around in the next few months? Conventional wisdom says no. While M&A activity is picking up, it’s (mostly) coming come from smaller deals. Thus it takes more to materially add to supply. Demand, conversely, is expected to remain strong. According to TR-LPC, CLO market participants expect strong issuance this autumn, with 2017 CLO forecasts raised to the $95 billion context. In turn, many market participants expect the new supply will slow the deterioration of terms and conditions, not that terms will turn around in the near term.