April 25, 2019 - The ARRC’s recommended LIBOR fallback language offers two approaches, an “amendment” approach (likely to be used currently) and a “hardwired” approach (likely to be embraced as the attributes of SOFR become clearer and LIBOR cessation approaches). So where is the loan market today? To answer this, the LSTA asked Covenant Review to analyze a sample of 1Q19 institutional term loans to determine today’s preferred fallback language. We discuss the results below and illustrate them in the nearby chart. 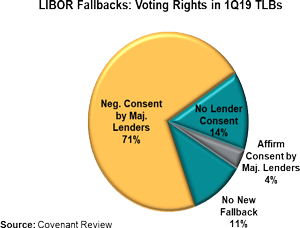 Using a sample of 56 new and amended institutional term loans, Covenant Review first noted that the amendment approach is basically the universal method today. This approach generally permits the agent and borrower, giving due consideration to prevailing market convention, to identify a LIBOR successor rate. (In addition, roughly half the sample mentions a spread adjustment to compensate for any differences between LIBOR and the successor rate.) Next, the lender group may (or may not) have the opportunity to vote on the replacement rate. In the 56 1Q19 transactions Covenant Review analyzed, 71% allowed the required lenders a negative consent amendment (to be exercised within five days). In 14% of the deals, no lender consent was required, while in 4% – admittedly, just two deals – majority lenders had an affirmative consent right. Somewhat less ideally, 11% of the transactions offered no new fallback language, and hence would likely just fall back to Prime.  To be fair, these were typically incremental amendments of older loans, not new deals or 100% amendments. In contrast, with ARRC providing exact contractual fallback wording in its recommendations, there’s no reason not to put robust language in every new or 100% amended deal.