Home / News & Resources / News / LIBOR: Getting On The ARRC

March 8, 2018 - While the ARRC was quiet over year-end, it has gotten a lot livelier during the past fortnight. Below we offer some background on LIBOR and then bring members up to date on recent ARRC efforts. Importantly, we note the LSTA has become a member of the ARRC when it was recently broadened to add cash market players.

The background (which ARRC aficionados can skip): Since the financial crisis, liquidity in LIBOR has deteriorated, banks (who face liability) do not like submitting LIBOR quotes – and regulators worry about systemic risk if LIBOR were to suddenly cease.  The ARRC (Alternative Reference Rates Committee) was convened by the Federal Reserve in 2014 to develop alternative (better, sturdier) reference rates. For years, the ARRC – which was primarily focused on fixing the swaps market – labored in relative obscurity. However, in July 2017, Andrew Bailey of the UK’s Financial Conduct Authority gave his famous speech where he warned that the FCA would no longer compel banks to submit LIBOR after the end of 2021 – and that LIBOR potentially could go away after thereafter.  The world woke up, became increasingly concerned about LIBOR, and began focusing on SOFR – a combination of three overnight Treasury repo rates and US$ LIBOR’s potential successor.  In the loan and CLO space, the LSTA has been active, holding meetings on transition language in loan documents, participating in the ARRC working group on business loans and CLOs, and convening its own working groups and roundtables on LIBOR.

The 2018 activity blitz: While there was an ARRC quiet period around year-end, the past fortnight has seen a whirlwind of activity. First, on February 28th, the New York Fed announced that it would begin publishing SOFR beginning April 3, 2018. This is important because, while SOFR may replace LIBOR, it is not actually a published rate yet. A long run of parallel publishing will allow markets to compare SOFR and LIBOR, and understand their differences.  Next, on March 1st, the CME Group announced that it would launch one-month and three-month SOFR futures beginning May 7, 2018. Thus, we should have both SOFR data and trading activity soon.

We also now have a cash market analysis and a roadmap to success (hopefully). On March 5th, the ARRC published its information-filled Second Report.  The report covered familiar ground, such as why LIBOR may not exist after 2021. But it also resized the LIBOR exposure problem, increasing it from $160 trillion to $200 trillion(!). And it explained why it chose SOFR as the replacement reference rate for the swaps market, as opposed to the Fed Funds Rate, the Overnight Bank Funding Rate (OBFR) or 3-month T-Bills.

In a nutshell, the ARRC chose SOFR because that’s where the liquidity is. As the LSTA Chart of the Week 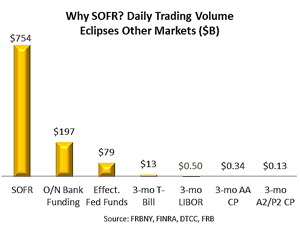 But while SOFR will likely be robust, it has a ways to go before it is a good reference rate for cash products. First, being a secured repo rate, it doesn’t have credit risk and therefore is lower than LIBOR. Second, being an overnight repo rate, SOFR doesn’t have a term structure (yet). That said, ARRC is looking to tackle these issues before any cessation of LIBOR.

The ARRC’s Paced Transition Plan (p. 17 of the Second Report) explains how it plans to build liquidity (and, ultimately, a term reference rate) for SOFR. Assuming that an active trading market in SOFR derivatives develops, the ARRC expects there could be a forward looking term reference rate based on SOFR derivatives by the end of 2021. While this is uncomfortably close to when the FCA said it would no longer compel banks to submit LIBOR, there’s potential for the term structure to be developed earlier. As p. 23 notes, a “demonstration” SOFR rate – which would be indicative of what the reference rate would look like and would be intended to increase market familiarity, but is not for use in contracts – could be built earlier as SOFR trading accelerates.

Clearly there has been progress. And, equally clearly, there is a lot to do. To do it, on March 7th, the ARRC announced that it had broadened its membership to facilitate a transition from LIBOR to a new reference rate. Importantly, many more cash market representatives – including the LSTA – have been asked to join the reconstituted ARRC, creating the potential for conversation, consistency and cross-pollination across asset classes. For more information on SOFR, ARRC and LSTA efforts, please contact mcoffey@lsta.org or tvirmani@lsta.org.