July 20, 2017 - In June, the Alternative Reference Rates Committee (“ARRC”) – a group set up to develop potential new interest rate benchmarks – announced that a broad Treasuries repo financing rate was selected as the new preferred alternative reference rate for LIBOR. Following that announcement, Reuters and Business Insider reported that the new benchmark could replace LIBOR. And, following that was a flurry of calls to the LSTA asking whether LIBOR is going away.

The short answer: No, LIBOR is not going away for loans – at least not for a number of years. (A Bloomberg article discusses many of the transition hurdles.) The reality is that most of ARRC’s focus has been on the derivatives market and any discussion around loans is just getting started. However, forewarned is forearmed – and in order to forearm our members, below we discuss i) why LIBOR could theoretically go away, ii) what are the efforts to strengthen and/or replace LIBOR, iii) what is this Treasuries repo financing rate, iv) what is the preliminary timeline for the derivatives market, and v) what are very preliminary thoughts on loan market impact.

First, the background on why LIBOR could theoretically go away. During the financial crisis, there were widespread allegations of attempted LIBOR manipulation by submitters. Since the financial crisis, there has been a decline in liquidity in LIBOR. To wit, more than 70% of 3-month LIBOR submissions are based on expert judgments by submitters, as opposed to actual transactions or interpolation of transactions. Submitters – who face liability – do not like providing quotes based on judgment, some LIBOR submitters have quit, and there are concerns that LIBOR liquidity may continue to wane. The decline in LIBOR liquidity is viewed as a potential systemic risk, and therefore major global financial regulatory entities – IOSCO, the Financial Stability Board, FSOC and more – have been working with market participants to reform benchmarks and find potential replacements.

At a high level, there are three efforts underway. First, there is an effort to strengthen LIBOR. To that end, the calculation of LIBOR has shifted to ICE Benchmark Administration (“IBA”), which is working to expand the number of submitters and tie LIBOR submissions as much as possible to transaction data. Second, and related, there are efforts underway to develop fallbacks in the event that LIBOR becomes unavailable. Third, there are initial efforts underway to transition from LIBOR to new Risk Free Rates (“RFR”).

Much of the effort in the U.S. thus far has centered on the $200 trillion US dollar derivatives market. This is why last month ARRC announced that “broad Treasuries repo financing rate” is the appropriate reference rate for “certain new U.S dollar derivatives and other financial contracts”.

So what, exactly, is it? The broad Treasuries repo financing rate is based on the cost of overnight loans that use U.S. government debt as collateral. It will include data from actual transactions throughout the repo market, including tri-party repo transactions, inter-dealer transactions cleared by the DTCC and some bilateral transactions.  ARCC chose this rate because it felt that the rate was liquid and deep (with average daily trading volume of $660 billion), it would likely remain robust over time and its construction, governance and accountability is consistent with IOSCO’s Principles for Financial Benchmarks. One not-inconsiderable drawback: It is an overnight rate. To be fair, officials have noted that it is possible to create a compounded 3-month rate, but this still is backwards looking. Importantly, it is a secured rate, which means it is lower than three-month LIBOR, as demonstrated by the LSTA Chart of the Week. 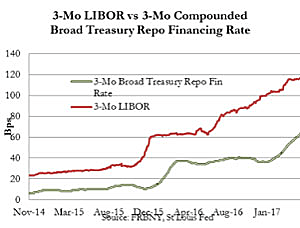 Critically, LIBOR is not being phased out any time soon – even in the derivatives market. (Slides 15-18 of this ARRC presentation show the paced transition time for swaps; clearly there are many steps and preconditions.)

So what does all this mean for the syndicated loan market? We will see whether regulatory agencies and market participants believe that LIBOR or LIBOR fallback language in loan documents could or should be replaced. (And, if so, whether the broad Treasuries repo financing rate would necessarily be the replacement.) If yes, new credit agreement language would have to be developed for a LIBOR replacement. Industry discussions are just beginning, and any decision and transition process would be counted in years. Watch this space for more information; alternatively contact mcoffey@lsta.org or tvirmani@lsta.org with specific questions.