May 2, 2018 - Why should you care about the potential end of LIBOR? The reality is that LIBOR – as an interbank lending market – has been shrinking since the financial crisis. How big is LIBOR (the interbank market) today? In its Second Report, the Alternative Reference Rates Committee (“ARRC”) estimated that there was roughly $500 million of daily three-month LIBOR trades. By that, they mean one bank borrowing from another bank at approximately LIBOR. These trades, then, become the basis of the quoted LIBOR curve. And this LIBOR curve becomes the reference rate for some $200 trillion of contracts (mostly in swaps, but also in $4 trillion of syndicated loans and $500 billion of U.S. CLOs).

As the nearby graphic shows, the reliance of some $200 trillion of contracts on $500 million of daily LIBOR trading may seem a little unbalanced. 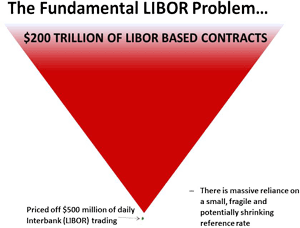 If something were to happen to LIBOR – like it ceases to exist – that $200 trillion of contracts may be in an unenviable spot. (Some of these contracts have workable fallback language if LIBOR ceases, while many others don’t.)

With this sort of imbalance, there are two obvious solutions: i) stabilize and rebuild LIBOR or ii) find a new reference rate. In the past five years, much work has gone into shoring up LIBOR and making its methodology more robust, as a recent ICE Benchmark Association report notes. However, LIBOR only exists as long as banks are willing to provide LIBOR quotes. Last July, the UK’s Financial Conduct Authority (“FCA”) said that they have been compelling banks to submit LIBOR – but that they would stop the compulsion at the end of 2021. At that point, banks may or may not continue quoting LIBOR and LIBOR may or may not continue to exist.

Considering the magnitude of the tail risk if LIBOR were to cease, it seems prudent to prepare for a potential new reference rate. What that rate is (possibly SOFR) and how to prepare for it (a lot of phased, hard work that must start now) was the point of a presentation made by LSTA EVP Meredith Coffey at a PLI Conference on May 2nd.

The LSTA is a member of the Alternative Reference Rates Committee (“ARRC”) and co-chairs the ARRC Business Loans and CLOs working group.  For more information on LIBOR and SOFR generally, please contact mcoffey@lsta.org or tvirmani@lsta.org.