April 25, 2018 - (updated on April 26, 2018) -There were three major happenings on the LIBOR/SOFR front this week. First, on April 24th, overnight SOFR and overnight LIBOR converged (at 1.7%) for the first time since SOFR began being published (see chart). Second, it was a fitting date for convergence as “SOFR preparedness” was one of the themes at the LSTA Operations Conference. Third, on April 25th, IBA published its “ICE LIBOR Evolution” paper. The paper discusses efforts to shore up LIBOR to encourage its continuance past the end of 2021, when regulators will no longer compel banks to make LIBOR submissions. We tackle these issues below.

First, we were heartened by the ICE publication that explained its efforts to strengthen LIBOR. A lot of methodological improvements have occurred, which we will detail in a later post. Consequently, the IBA hopes it has a framework that allows it to “publish the LIBOR rates that are critical to the global financial system and which banks are willing to support, alongside the alternative risk-free rates that are being developed.” As Asset Securitization Report reported, the LSTA also shares that desire. We are pleased that ICE is continuing its work to strengthen LIBOR. At the same time, we believe it is prudent for the loan market to be prepared to function in case LIBOR ceases.

And SOFR preparedness was the focus of the second panel at the LSTA’s Operations Conference on April 24th. There, we discussed i) the LIBOR problem, ii) the proposed solution, iii) the “problems” with the proposed solutions, iv) how to solve these problems and v) the need to solve and operationalize all this before the end of 2021. We discuss the “aha” moments – and direct you to relevant charts – below.

Slide 4 of the LIBOR presentation graphically illustrates the problem. To wit, more than $200 trillion of financial contracts – derivatives, loans, FRNs, CLOs, other securitizations, etc – are priced off a small, shrinking and fragile interbank (i.e., US$ LIBOR) market. Specifically, there are an estimated $500 million of three-month interbank trades – where one bank lends to another bank at LIBOR – a day. 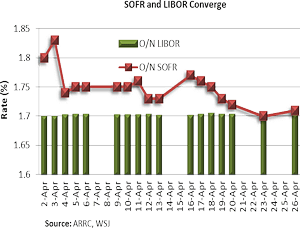 These $500 million of trades are the foundation for calculating LIBOR, which then is the basis for pricing $200 trillion of contracts. The solution is either to fix LIBOR or to potentially replace it. A great deal of work has gone into stabilizing and fixing LIBOR – and hopefully it will remain in place after the end of 2021. But that cannot be guaranteed, and thus the market has to try to find an alternative rate.

The rate proposed for the derivatives market – and which may be the most likely candidate for the loan market – is SOFR, the Secured Overnight Financing Rate. SOFR is a combination of three overnight Treasury repo rates, and it boasts many attributes. First, more than $700 billion of these repos trade daily and the Federal Reserve Bank of New York collects and tabulates the data. Thus it is deep, robust, hard to manipulate and likely to continue to exist. But, on the down side, it is very different from LIBOR. And this is challenging for a market that grew up on LIBOR.

First, as Slide 6 explains, SOFR is an overnight rate and does not yet have a term curve, e.g., it is not quoted as a one-week rate, one-month rate, three-month rate, etc. For borrowers used to borrowing on a term basis – and knowing what their interest cost will be at the end of the term – this is a considerable challenge. However, a term reference rate will be developed as forward trading begins on SOFR.

Second, and rather nettlesomely, SOFR is a secured, risk-free rate, while LIBOR is unsecured and is meant to represent banks’ cost of funds (“COF”). As a result, LIBOR should be higher than SOFR. And more critically, SOFR and LIBOR should behave differently in periods of credit stress. LIBOR should widen – as bank credit risk and COF increases – while SOFR should be flat or contract. (See Slide 7 for what happened to LIBOR vs. OIS in 2008.) With SOFR, banks potentially could be contractually required to lend below their COF in such a situation.    This problem may be resolved through a bank credit spread adjustment (“CSA”) that captures the difference between LIBOR and SOFR. A point of much debate today is whether that CSA should be static (e.g., calculated at a point in time and never changed) or dynamic (e.g., varying as bank credit risk varies). The static CSA is infinitely simpler; the dynamic CSA is far more complex, but is a closer fit to LIBOR.

The second case study on Slide 13 focuses on multicurrency facilities – and becomes more complicated. Each currency will have a different new reference rate, some of which are secured and some of which are unsecured. Thus, the CSA will vary for the different rates and therefore more fields (and screens) will be needed to calculate the interest rate.

Of course, the case studies discussed are purely theoretical. As more information becomes available on SOFR, the term structure and the CSA, we believe that more complications could emerge. But we also believe that the Operations experts are up to the task…if they begin focusing now!

The LSTA is a member of the Alternative Reference Rates Committee (“ARRC”) and co-chairs the ARRC Business Loans and CLOs working group.  For more information on LIBOR and SOFR generally, please contact mcoffey@lsta.org or tvirmani@lsta.org.