August 17, 2017 - Since the LIBOR speech by Andrew Bailey, Chief Executive of the FCA on July  27th, markets have been buzzing about whether LIBOR is ending, when it might end, and what loans and CLOs would do. On August 17th, the LSTA hosted a webcast walking through i) why LIBOR might end, ii) what the replacement might be, and iii) ways to approach loans and CLOs. We recap these issues below and encourage you to visit our LIBOR webcast page for slides and a replay.

To put the enormity of the LIBOR issue into context, one should realize that exposure to LIBOR tops $150 trillion (that’s trillion with a “T”) across asset classes. (See chart.) So, it is a big issue. 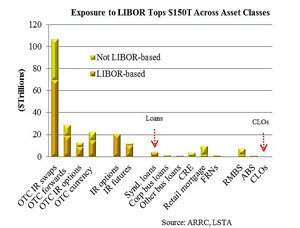 But why might LIBOR go away? First, there were widespread allegations of manipulation by LIBOR submitters during the financial crisis. This led to jail terms and billions of dollars of fines. As a result, LIBOR submitters now have liability and this makes banks unenthusiastic about submitting. In addition, there simply isn’t much liquidity in the underlying LIBOR market. More than 70% of three-month dollar LIBOR submissions were based on “expert judgement” by submitters, not actual transactions or interpolation of transactions. All regulators are concerned about LIBOR liquidity, but the FCA, in particular, made waves last month when it announced it would not compel banks to submit LIBOR after 2021. (The subtext was that LIBOR may well go away thereafter.)

While the LIBOR issue may have come as a surprise to some, in reality industry and regulators have been working on it for years.  In 2014, FSOC recommended that regulators work with market p0articipants to identify new benchmarks and develop a plan to transition to a new benchmark. And, lo, the Alternative Reference Rates Committee (“ARRC”) was formed. After nearly three years of work, in June 2017, ARRC announced its preferred alternative reference rate – the Broad Treasuries Repo Financing Rate (or BTFR).

This rate, which is the cost of overnight loans that use US government debt as collateral, has much to recommend it: It is transactional, liquid and deep (with an average daily trading volume of $660 billion), it will likely remain robust, and it satisfies IOSCO’s Principles for Financial Benchmarks. But there are cons for loans: BTFR is an overnight, secured rate. Thus, even with compounding, it is backwards looking and it is materially lower than LIBOR (see p. 5 of the slide deck). And, FYI, it doesn’t exist yet. The FRBNY will begin publishing it mid-2018.

So this raises a number of questions. First, assuming it is possible to build a forward looking BTFR term rate, is this the right rate for the loan market? Moreover, how do the loan and CLO markets prepare for a rate that does not exist yet? There are issues to consider both with legacy loans and CLOs, as well as ones that will be issued in the coming years.

On the loan front, things are a bit more settled. Credit agreements often provide fallbacks in case LIBOR is unavailable. The first fallback typically is that, if the screen rate is unavailable, the definition of LIBOR may provide for the use of i) an interpolated rate, ii) the offered quotation rate to first class banks for deposits in the London interbank market and/or iii) quotes from designated “reference banks”.  The second customary fallback is the “market disruption event” clause. Upon a trigger event, lenders can suspend making LIBOR loans and LIBOR loans become base rate/prime rate loans.

To be fair, these LIBOR fallbacks were designed for temporary disruptions, not the death of LIBOR. But with no replacement rate in the offing yet, it is likely too early to draft for a new benchmark. Instead, market participants should understand their existing fallback and amendment provisions in case LIBOR is discontinued. For new agreements, parties might consider hardwiring an ability to amend the credit agreement to address a new benchmark with less than 100% lender vote if LIBOR were discontinued.

Loans, because they are made to be amended, are in a better spot than CLOs. Existing CLO indentures typically specify the source of LIBOR and have methods (polling banks, using the last observed rate) if the LIBOR source is not available. However, amending CLO indentures is difficult and, in some cases, impossible. A LIBOR amendment would typically require 100% vote of each class and majority of equity. So, any LIBOR amendment probably should be done in the context of a reset or a refinancing where all holders of non-refinanced classes are known. The good news, though, is that if LIBOR is discontinued after 2021, most existing CLOs may well be in wind-down mode (or post-non-call) already.

This tiered approach anticipates that the impetus for modifying the reference rate could range from a clear certainty that LIBOR will no longer be reported to a situation where LIBOR continues to be reported but is no longer prevalent as the reference rate in the leveraged loan market.  It would provide options for the selection of the replacement rate under circumstances that might run the gamut from an industry standard that develops quickly to a substantial period during which a number of alternatives compete for market share.  Having a relatively quick and inexpensive option for cases where greater certainty develops and reserving amendments requiring significant levels of consent for situations with less certainty will provide much needed flexibility as a more definitive path forward develops.  The goal is to coalesce around a set of options in the near term that balances the interests of all parties.

In conclusion, the possible transition from LIBOR to another reference rate is a process, not an insurmountable problem. Many entities have been working on the process for years and no one – particularly regulators – is interested in a market disruption. On the LSTA front, we will continue gathering and providing information, we will be involved in a LIBOR replacement for loans as appropriate, and we will work with loan and CLO market participants to further develop LIBOR fallback and transition language.