March 14, 2019 - This week, the loan market enjoyed a view of the past (4Q18 S&P/LSTA Index loan earnings), present (default rates) and potential future (loan terms). What can we take away? Despite a tough fourth quarter in the markets, times are good credit-wise. But we can’t help remembering the old adage about the kinds of deals that are done in the best of times.

LCD starts us out with stats from the public reporters (189 companies) in the S&P/LSTA Leveraged Loan Index. The news was encouraging. As the COW indicates, 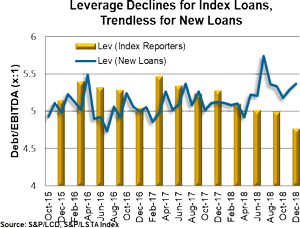 EBITDA was up 10% during 4Q18, reducing average leverage to 4.8x, down half a turn year over year. Weighted average leverage was down 0.66 turns to 5.2x. (To be fair, as the COW also demonstrates, leverage on new HLT loans is not trending down.) On the “ability to service debt” side, interest coverage ratios on Index reporters held at a record high 4.6x.

With improving earnings, strong coverage ratios and few near-term maturities, it’s little wonder that Fitch’s loan default rate is just 1.6% (well below the 3% long-term average) and expected to decline to 1.1% by the end of March.

While corporate fundamentals appear strong, loan yields also are encouraging. LPC sees single-B loan spreads in the mid-400s over LIBOR. More impressively, yields have climbed substantially in the past year as LIBOR has increased and OID have deepened. By their calculation, the yield to three years on new single-B loans is nearing 8%.

But will investor discipline hold (particularly around documentation, which might dictate future performance)? LevFinInsights tries to answer that question by looking at covenant flexes in the February market. According to their Documentation Scores, borrowers pushed for aggressive terms – and investors sometimes pushed back. Using a range of 1 (most protective) to 5 (least protective), February’s average  Covenant Score started at 3.69 in the initial draft of loan agreements, and tightened to a more conservative 3.35 in the final executed version. Biggest areas of improvement included asset sale sweep stepdowns, MFN sunsets and uncapped EBITDA adjustments. Still, on an absolute basis, January’s deals were more conservative; we will see where March takes us.