November 15, 2018 - In early October, we detailed what practitioners monitored in the third quarter leveraged loan market. This week, in its Senior Loan Officer Opinion (SLOO) Survey, the Fed published what loan officers noted on third quarter. While no one saw the same things, the SLOs flagged a metric that could portend a downturn. (Hint: Yield curve inversion.)

In the leveraged loan market, according to the stats we examined, volumes appeared to plunge and spreads appeared to climb in third quarter. In fact, what happened was that a deluge of real loan supply came on line, this sated investor demand and crowded out refinancings. (Thus, without all the churn, volume appeared to decline when, in fact, the S&P/LSTA Loan Index grew 4% in third quarter.) With sufficient supply, lenders were able to push back on borrower friendly terms and spreads, pushing pricing up noticeably (if temporarily).

What did the senior loan officers see (admittedly, not just in the leveraged market)? 22% of large bank respondents said they loosened terms on large and middle market C&I loans. How so? Of those that loosened, 46% said they reduced spreads, 17% said they reduced premiums on riskier loans and 33% said they eased covenants. Why did they do so? In a word, competition: 52% flagged heightened competition as a very important factor. Interestingly, considering all the Leveraged Lending Guidance hubbub, 86% of respondents said that reduced concerns on regulation were not an important factor in easing terms (see the LSTA’s Chart of the Week). 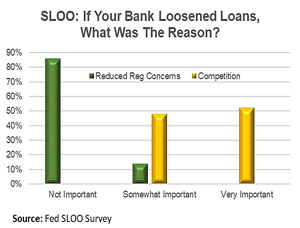 The SLOO respondents also saw a different supply dynamic. While borrower demand for debt – thanks to M&A – increased in the leveraged loan market, SLOs saw reduced demand: 35% saw borrower demand for C&I loans decline. The “why” might be interesting on several fronts.  First, companies seemed to be doing fairly well: Of those that saw reduced demand, 73% said increased internally generated funds were a “somewhat important” reason and 13% said it was a “very important” reason. Meanwhile 57% said that decreased investment in plant or equipment was a somewhat or very important reason that demand dropped. Another 60% flagged a decline in M&A as a somewhat or very important reason.

The Fed didn’t just ask bankers to look backwards though. They were asked to think about the cycles of today and tomorrow, specifically with respect to a flattening yield curve. When asked how this year’s flattening yield curve had affected loan terms, 93% said it had basically no impact. However, when asked if the yield curve were to invert next year, 40% said they would tighten terms somewhat or substantially. Respondents were then asked to opine on three possible reasons why.   95% said it would signal a less favorable economic environment, 90% said it would likely be followed by deterioration in the quality of their loan portfolio, and nearly 80% said their risk tolerance would decrease.