February 11, 2019 - As most readers know, LIBOR is likely to go away after the end of 2021, and SOFR – the secured overnight financing rate – is likely to be the replacement for dollar-based cash markets (translation: loans). But there is a lot of confusion about SOFR. We look to dispel one point of confusion – SOFR’s volatility – below. For all the facts, we’d direct readers to the Alternative Reference Rates Committee’s (ARRC) SOFR FAQs.

Why is this important? There have been several articles in 2019 – including one this week in the WSJ – that bemoan the volatility of overnight SOFR and subsequently question the usability of SOFR as a benchmark rate. It is true that overnight SOFR tends to jump at month-end, quarter-end and year-end. However, a one-day move out of a 360- or 365-day financial year does not move the needle very much. In fact, when SOFR is compounded or averaged to create a reference rate, the one-day volatility is almost completely washed out. 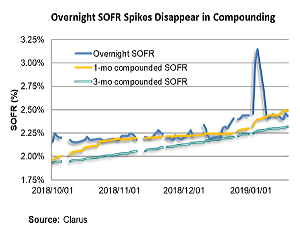 The nearby chart compares the overnight, one-month and three-month compounded SOFR rates. As the chart demonstrates, once a rate is averaged or compounded, one-day’s volatility becomes a non-issue. (Interested in more analysis? SOFR volatility is discussed in more detail in the Question 16 of ARRC’s SOFR FAQs. And, finally, we would direct readers also to look at the chart on p. 10 that compares 3-month SOFR to 3-month LIBOR. Not only is 3-month SOFR less volatile than overnight SOFR, it also is less volatile than LIBOR itself.)