October 5, 2017 - Third quarter 2007 saw a flicker of balance in August 2017, bookended by the usual trends: too much institutional lender demand chasing too little loan supply. We discuss the technical trends – and consequent terms and conditions – below.

On the supply side, though they all have different collection methodologies and thus post different volumes, S&P/LCD, TR-LPC and LevFinInsights all saw gross leveraged loan issuance declining. TR-LPC has institutional lending dropping from $220 billion in 2Q17 to $142 billion in 3Q17. LevFinInsights saw “priced deals” decline from $250 billion in second quarter to $157 billion in third quarter. LCD, meanwhile, has 3Q17 institutional lending at $107 billion, down 14% from 2Q17 and 37% from 1Q17.

But this was a “good” decline from an institutional lender point of view. After record repricing volumes early in the year, spread slashing has dropped sharply. LCD notes that leveraged refinancing activity dropped by 46% between second and third quarter. Meanwhile, leveraged loan repricings via syndication or amendment plunged to $65 billion, down from $112 billion in second quarter and a record $224 billion in first quarter.

In their place came real money deals: M&A, LBOs and dividend recaps.  LCD pointed out that, at $66 billion, 3Q17 institutional M&A activity was around 2Q17 levels. However, the prior time that the market enjoyed levels this high was 2007. Ditto with the $37 billion of LBO loans.  As a result of these new money deals, outstandings in the S&P/LSTA Leveraged Loan Index increased by more than $13 billion in third quarter and more than $57 billion so far this year.

But… demand continues to grow even faster, albeit from different sources. In January, loan mutual funds enjoyed $4.5 billion of inflows, while CLO issuance did not even break the $1 billion mark, according to TR-LPC. Thus, more than 80% of January’s visible demand came from loan mutual funds. But then the tables started turning. By February and March, CLO formation rebounded and accounted for two-thirds of visible demand. By summer, CLOs accounted for 95% of visible demand. And in third quarter, loan mutual fund investors, discounting near-term interest rate increases, pulled more money out of funds than they put in. But CLO issuance has climbed past $80 billion this year and SMA appetite is said to be very robust (if unquantifiable), more than compensating for any loan mutual fund outflows. Tallying up the numbers, 2017’s visible demand has topped $98 billion, while net supply – via index outstandings – is just $57 billion.

Little wonder, then, that terms and conditions continue to favor borrowers, albeit in decelerating fashion as some lenders – like CLOs – cannot bear dramatically tighter spreads or lower ratings. (Self-awareness requires us to acknowledge that these may be ‘famous last words’.) New issue spreads stabilized somewhat in third quarter as M&A activity replaced refinancings and some borrowers tried to go places investors couldn’t follow. LCD calculates that the average all-in spread on B+/B rated TLBs sat at LIB+383 in September, close to their June levels (see LSTA Chart of the Week). 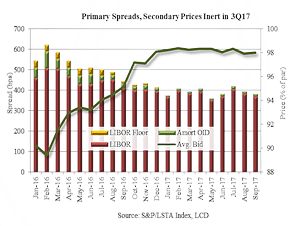 Higher up the rating spectrum, when BB/Ba2 Allison Transmission tried to reprice to LIB+175 – a heavy lift for WAS-constrained CLOs – the market didn’t follow and the repricing stalled. Still, even if average spreads have stabilized, flex continued to favor borrowers every month in 2017. August was the closest month to balance when only 19% of loans flexed down and 10% flexed up, according to LCD.

Rating tolerances – also an issue for WARF-constrained CLOs – are being tested as well. LevFinInsights notes that nearly one-third of deals (excluding repricings) came with a B3 handle in third quarter. This is up from 21% in 4Q16. (And, of course, documentation is a whole other issue, but this was discussed extensively in last week’s Credit Recap and Crew You webcast.)

So will capitulation define the fourth quarter? LPC, LCD and LevFinInsights suggest it may. After a flurry of deal-doing in September, forward calendars have shrunk considerably. So unless a wave of M&A bolsters supply or redemptions flatten demand, the market may see pressure for the remainder of the year.