October 4, 2018 - Third quarter 2018 in a nutshell: Loan origination volumes down, spreads up. Or, perhaps, the other way around. Following a deluge of supply in early 2018, leveraged lender appetite was temporarily sated and spreads pushed wider. As spreads widened, repricings and refinancings, the source of recent volume stats (if not actual new lending) tailed off. In turn, nominal lending volumes dropped a startling amount. But all seasons change, and the loan market is no exception. By late September, borrowers were regaining power, 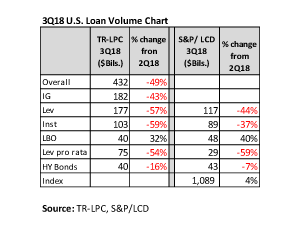 First, a quick glance at the 3Q18 U.S. Volume Table demonstrates the quarter’s surprising statistical carnage. Both LPC (aka Refinitiv) and S&P/LCD show a sea of red when comparing third quarter to second quarter volume numbers. Looking at the entire market, including investment grade, LPC’s lending numbers dropped 49% from second quarter. Indeed, this is the lowest quarterly total since 1Q16, when commodity woes stoked volatility and quashed syndications. Leveraged lending dropped more precipitously (falling either 57% or 44%, according to LPC and LCD, respectively) and institutional lending tumbled (by 59% or 37%, respectively).

Of course, all of this is something of a sleight of hand.  According to LCD, B+/B institutional loan spreads bottomed out in the mid-LIB+300s in early second quarter, their lowest level since the financial crisis. But as more supply came on line, investors gained the upper hand and pushed back on thinner spreads. In turn, B+/B spreads rebounded to the high LIB+300s (low LIB+400s when amortized OIDs are included), the highest level in two years.

But that’s not bad news. In fact, real lending continued to be strong in third quarter. Overall institutional M&A lending totaled $71 billion according to S&P/LCD, the second highest quarter since the financial crisis. As noted, LBO lending increased by 30-40% over second quarter. To be fair, this was due in large part to a handful of jumbos like Refinitiv, Akzo Nobel and Envision Healthcare. These big deals did not just buoy LBO volumes. Because there were so large, they looked to the HY bond market to place debt as well, LCD adds. In turn, HY bond issuance “only” edged down to the $40-43 billion context. And finally, the retreat of refinancings and repricings did not slow the growth of the loan market. Anemic topline figures notwithstanding, the S&P/LSTA Leveraged Loan Index grew to $1.089 trillion, up 4% for the quarter and 14% for the year.

So where do we go from here? Well, there is some good news and some bad news. On the good news front, credit quality continues to endure, even if documents on new loans seem aggressive. (More on this next week.) On the “less-good-news” front, the supply-demand balance appears to be returning to imbalance. LevFinInsights lists the markers of a turn: The jumbo post-Labor Day deals all cleared nicely, reverse flexings reappeared (30 of them in September) and repricings re-emerged ($10 billion in September). And now, the cupboard is (more) bare.  LFI adds that they are tracking $30 billion of M&A related loans – that add up to $20 billion of new money – likely to come in fourth quarter. Meanwhile the “net-net” forward calendar stands at a much thinner $11 billion.

As The Byrds might say – if they were loan junkies – “Turn, Turn, Turn”.