September 28, 2017 - While lenders have been focused on retail woes all year, last week’s bankruptcy filing of Toys ‘R’ Us intensified the attention on the sector specifically – and on credit quality and protections in the loan market generally.  First, the WSJ and Reuters reported that the 2005 LBO debt load made fixing Toys’ secular retail problem nearly impossible.  Next, on the bankruptcy news, Toys’ debt dropped dramatically, as chronicled by LCD and charted in the LSTA Chart of the Week. 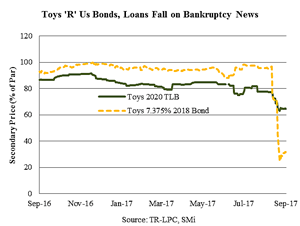 But what does Toys ‘R’ Us actually mean for loan market credit stats? Toys’ filing pushed the institutional loan default rate in the troubled retail sector to more than 7% from August’s 5.3%, Fitch reported. It is the sixth retail default since April and the second largest after J.Crew. And there may be more in the queue. Fitch sees the retail default rate hitting 10% by year-end; if Sears topples, it could be 12%.  All told, around 20% of performing retail loans are priced below 80, LCD adds.

But retail is just one sector. Even with Toys’ filing, the overall loan default rate just edged up to 1.8% from 1.7% in August, Fitch noted. So how is everything else doing? According to an audience survey at the ThomsonReuters LPC Loan Conference, some cracks are appearing in portfolios: 24% of respondents said some companies are falling below targets and 57% said that the pace of growth for some companies is slowing. On the flip side, nearly 20% said EBITDA growth remains steady and there is little change in their portfolios.

While portfolios – ex retail and energy – may still be mostly solid, folks fret that loose docs could set the stage for worsening recoveries when the credit cycle does finally turn. When surveyed, 69% of the audience at the TR-LPC Conference said that covenant lite loans will perform worse in the next downturn, relative to the last one (when they performed relatively well). Moody’s concurs, but points out that it may not be lack of maintenance covenants, but rather shrinking debt cushion in covenant lite loans that could drive recoveries lower.

So is there any “good” news out there? Yes. In the “misery loves company” category, we’d note that we are not alone. Martin Fridson in LCD this week reported that there was a record plunge in high yield bond covenant quality. On a scale of 1 (strongest) to 5 (weakest), the Fridsonvision covenant score fell 0.73 points to 4.59 in August.

More seriously, there is real good news. First, Moody’s reported that recoveries have improved substantially for E&P defaulters. Firm-wide recovery rates were 49.5% for 2016 defaulters vs. 21.4% for 2015 defaulters. And the recoveries are better in loans, of course: The average discounted recovery rate was 97% for RBL/Borrowing base revolvers and 84.5% for first lien bank debt. (To be fair, it was just 34.3% for second lien bank debt.)

Second, lenders can find solace – and stronger structures – in the middle market.  CovenantReview noted that terms and conditions continue to be fairly aggressive in deals tracked in the past six months. However, middle market sponsored deals still are documented more conservatively than large PE, mid-sized PE and public issuers. A few cases in point: Just 16% of the middle market PE deals were levered at 6x or more, and only 6% were covenant lite.

Third, lenders are pushing back (when they can). Xtract points out that in two recent large sponsored loans, lenders pushed back on the Investments’ “black hole”, imposed/reduced caps on EBITDA add-backs, converted a “freebie” basket back to a fixed dollar basket, and tightened MFN language.

And finally, while investor push-back may be fleeting, there might be a normalization of terms in the longer-term. Slightly more than half the poll respondents at the TR-LPC conference said that the structural characteristics of loans would become more conservative again once the cycle turns and credit quality deteriorates.