Home / News & Resources / News / Credit Quality: Up or Down?

June 29, 2017 - June might have been the tale of two months. While early June was relatively benign, problems in the oil patch and retail reasserted themselves in latter part of the month. Nevertheless, loan managers forecast modest defaults in the coming year. After that, well, time will tell. We discuss all below.

First, the current default rate remains benign. Fitch expects the U.S. institutional loan default rate to be around 2% at month-end, up slightly from May’s 1.8%. S&P/LCD, meanwhile, calculates the late-June default rate in the S&P/LSTA Leveraged Loan Index (“LLI”) at 1.54%, slightly higher than the 13-month low of 1.41% hit in February. On a similarly benign note, Moody’s Liquidity Stress Index (“LSI”), which measures the amount of liquidity stress companies face, fell to 3.7% in mid-June, down from 4.2% in May.  This is the lowest level seen since November 2014. The reason? Earnings gains (including some in commodities) and favorable financing conditions.

But, to be fair, the second half of June has been rougher. The average bid in the Oil & Gas LLLI subsector fell 340 bps to the 82 context by late June. More pointedly, the share of Oil & Gas loans bid below 70 climbed from 5.3% in February to 18.4% in May, and 25.6% in late June. This is the highest sub-70 share since last November.  Retail, meanwhile, also dragged on the LLLI. In May, retail posted a positive 1.32%. But more recently, PetSmart’s loan has faltered, Gymboree filed for bankruptcy and J.Crew managed a widely-publicized (and pilloried) financial maneuver, which pressured its loan. In turn, as retail bids dropped 180 bps, the segment has returned a negative 1.59% thus far in June.

So where are the worries (and what are the mitigants) going forward? Fitch identified $35.8 billion of “loans of concern”, with three sectors bringing the bulk of the pain. As the LSTA Chart of the Week illustrates, at 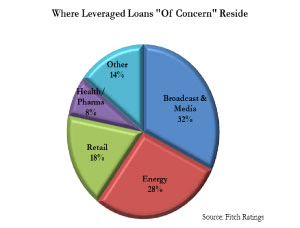 $11.5 billion, the greatest pressure comes from Broadcasting & Media. That said, only four companies comprise the Broadcasting “concern” credits, with iHeartCommunications alone accounting for $6.3 billion.  In contrast, 14 energy companies, with $10 billion in loan debt, are on the “Concern” list. Rounding out the top three is Retail, with nine companies and $6.3 billion in debt.

How does this translate into Fitch’s default expectations? They see overall loan defaults rising to 2.5% by year-end. In the energy space, the loan default rate could hit 18%. (Note that the energy default rate in loans actually is expected to be higher than in bonds, due to a larger universe of HY energy bonds.) In retail, the year-end default rate is expected in the 9% context; that said, the fate of Sears – with its $2.5 billion in loans – creates considerable variability in those estimates.

While Fitch sees loan defaults climbing to 2.5% by the end of 2017, loan investors do not expect default rates to hit that level until the end of 2018, LCD noted. Indeed, while they may not be complacent about credit quality, investors see few events that would trigger a wave of defaults – at least in the near term. Thanks to low odds of a recession, a general lack of near-term maturities (or covenants), strong cash flow coverages and issuer-friendly technicals, there just may not be much to drive defaults in the very short term. But longer term, of course, may be another matter.

November 28, 2022
We have previously summarized the SEC’s recent proposed rule on Outsourcing by Investment Advisers (the “Proposed Rule”) that would require Registered Investment Advisers (advisers) to conduct…
November 25, 2022
November 25, 2022
November 23, 2022
The UK’s Financial Conduct Authority (FCA) has now made clear its intentions with respect to synthetic USD LIBOR and – subject to its market consultation…
November 23, 2022
November 23, 2022 - After a Covid-driven hiatus of three years, the LSTA finally returned to Tel Aviv.  Elliot Ganz moderated a panel attended by…
November 18, 2022
This week we cover LSTA (and other trades) ask SEC for reasonable time; Tokyo Investors' Takeaways
November 16, 2022
November 16, 2022 - This week, the LSTA, joined by six other trade associations, submitted a comment letter to the SEC seeking extension of the…
November 16, 2022
On November 9th, the LSTA. along with a slew of CLO managers, arrangers and investors, welcomed more than 600 Japanese investors to the LSTA Tokyo…
November 15, 2022
The Morningstar LSTA US Leveraged Loan Index gained 1.03% last month, returning to the black after a 2.27% loss in September.
November 11, 2022
This week we cover LSTA puts ID in ESG! SEC puts loans in "illiquid"? SEC requires outsourcing disclosure; LSTA offers flood standards.