March 22, 2018 - LIBOR – and the LIBOR-OIS spread – has been rising rapidly in recent months.  What does this mean for the loan market – and for the “End-of-LIBOR” debate?

Three-month LIBOR hit 2.27% on Wednesday, up from 1.7% at year-end. On the plus side, this should be good for loan investors. Even as the spread on B+/B TLBs has fallen 35 bps since December 2017, thanks to rising LIBOR, the new issue yield on B rated TLBs has climbed from 5.5% to 5.6%, according to S&P/LCD. But why is LIBOR moving so quickly – and what are the implications beyond loan yields?

Commentators flag several factors driving LIBOR’s move. First, the Fed is now raising rates in a material way. On Wednesday, it raised the Fed Funds Rate from 1.5% to 1.75%, and looks to raise rates three (or possibly four) times in 2018. But several other technical factors are affecting LIBOR too, reports Bloomberg. First, there has been a dramatic increase in Treasury bill issuance since the debt ceiling was lifted. In addition, in the wake of tax changes, U.S. companies are repatriating cash that previously may have been invested in commercial and bank paper. As demand dwindles, rates rise.

In turn, LIBOR has risen much faster than the Overnight Index Swap (OIS) rate, a risk-free rate. The LIBOR-OIS spread differential, which is a proxy for bank credit costs, widened from 26 bps at the beginning of the year to more than 55 bps earlier this week (see chart). 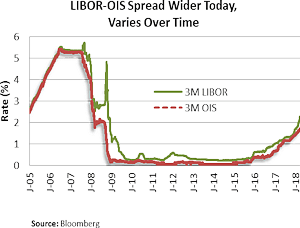 While sometimes a measure of bank stress, commentators note that today’s LIBOR-OIS gapping may be technical and may well ease.

But even if the gap narrows to historical norms, the recent LIBOR-OIS widening may inform the discussions around the potential end of LIBOR after 2021. In preparation for LIBOR’s possible demise, U.S. Alternative Reference Rates Committee (ARRC) has been developing a new reference rate, the Secured Overnight Funding Rate (SOFR), a risk free Treasury Repo rate that should be correlated with OIS and will be lower than LIBOR. (See pps. 14 and 16 of the ARRC Second Report for relevant charts.) SOFR will be published starting in April, but we can track its potential behavior by observing OIS.

Importantly, OIS (and, presumably, SOFR) is not just lower than LIBOR; the relationship between them is inconsistent. While LIBOR and OIS often move in the same direction, there can be material spread differences between them. As mentioned, the LIBOR-OIS gap doubled to 55 bps this year; more materially, in October 2008, it topped 360 bps.

This might create issues for our market, where loans are priced over banks’ cost of funds (i.e., LIBOR). If SOFR were a fixed number of basis points below LIBOR, a “bank credit spread adjustment” could easily be added to a new SOFR-based spread. However, the fact that the LIBOR-SOFR differential may vary – sometimes dramatically – adds complexity to creating a new SOFR-based loan rate. (This doesn’t mean it’s not solvable. It’s just more complicated, as discussed in the LIBOR article on p. 76 of the LSTA Chronicle.)

The LSTA is a member of the ARRC and is engaged in efforts to facilitate the development of SOFR. For more information, please contact mcoffey@lsta.org or tvirmani@lsta.org.