Home / News & Resources / News / Leveraged Loans: Neither the Best, Nor the Worst, of Times

August 9, 2018 - Fiery headlines notwithstanding, syndicated loan terms apparently are not the easiest they have ever been. How do we know? The Federal Reserve told us (and Senior Loan Officers told them).

In its quarterly Senior Loan Officer Opinion (SLOO) Survey, the Fed covered the usual themes: Whether banks loosened in second quarter, which terms loosened, and whether borrower demand was up or down. But it also compared today’s loan terms to average terms since 2005. We discuss all this below – and compare the Fed survey results to trends we see in the loan market today.

First off, the SLOO survey results and the leveraged loan market may have gone in somewhat different directions over the past quarter.  In the survey, 22% of large banks said they loosened terms “somewhat” on loans to companies with sales of $50 million or more. Not one bank said they tightened terms. Of those that loosened, 33% offered larger loans, 51% reduced loan spreads and 31% continued to loosen covenants. And why did they loosen terms? Because everyone else did: 54% of respondents said that more aggressive competition was a “very important” reason for loosening terms. (We would note that less than 5% flagged legislative or supervisory changes as a “very important” reason for loosening terms. So, despite the the confusion around Leveraged Lending Guidance, banks may have standards!) On the other side of the supply/demand equation, TR-LPC noted (and charted) that SLOO borrower demand was roughly unchanged in second quarter. 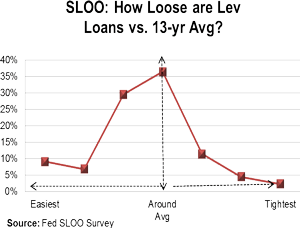 So how do SLOO trends compare to what we saw in the leveraged loan market in second quarter (and July)? In fact, they were rather different. Material new deal flow came on line in 2Q18, driving outstandings in the S&P/LSTA Leveraged Loan Index up by a non-trivial $54 billion. While lender demand remained solid, it wasn’t strong enough and terms and conditions turned – probably briefly – in favor of investors. S&P/LCD reported that BB/BB- TLB “all-in” spreads increased 20 bps over second quarter (and 33 bps between May and June), while B+/B TLB “all-in” spreads widened more than 30 bps. With leverage declining, spread per unit leverage increased to 126 bps, up from 95 bps in the first quarter. Likewise, Covenant Review and Xtract reported that covenant terms, while hardly investor friendly, inched a bit back in lenders’ direction.

But July might have marked another turning point. Leveraged loan volume declined to $37.6 billion in July, the third slowest month this year, LCD wrote in its July LoanStats. And as we reported last week, secondary market bids in the LLI climbed 34 bps, while the par-plus market share rebounded to 44%. In the primary market, flex activity moved closer to neutral territory in July, with TR-LPC tracking 13 reverse flexes and 10 upward ones. And thus far in August, LevFinInsights wrote that reverse flex activity may be marking a shift back to a borrower-friendly loan market for regular-way transactions.

“So what does today’s rapidly evolving market look like relative to the “midpoint” since 2005?”, the Fed asked SLOO bankers. Veterans may see a trick question: The loan market never tarries at a midpoint – it is always hurtling through to either a hot market or a retrenching one. But when forced to answer, bankers say that the market is looser than the midpoint, but is not remotely the easiest it has been since 2005. As the COW demonstrates, 36% of bankers say the leveraged loan market is at its midpoint, 18% say it’s tighter than its midpoint and 45% say it is looser than its midpoint. (And just 9% say it’s at “near easiest” terms.)

What does the long-term data show? Since 2005, the “average” all-in spreads for new issue BB/BB- and B+/B TLBs have been LIB+334 and LIB+471, respectively. But this average hides very low lows (LIB+157 and LIB+213, respectively, in early 2007) and incredibly high highs (LIB+560 and LIB+860, respectively, in late 2011), according to LCD.  And, as we know, documents are looser and leverage is higher than average – but so is coverage. So perhaps the SLOO bankers are right after all: It is neither the best, nor the worst, of times.