When it comes to predicting the next downturn, there have been countless articles discussing what inning we are in – enough already! – and comparing today’s loan terms to those in 2007. What is less frequently discussed is how the systemic underpinnings of the market are fundamentally different: Underwriting is different, pipeline management is different, the investors are different and, indeed, the very names atop the league tables are different. We’ll cover all this below, having highlighted it in a recent presentation.

From a credit fundamentals perspective, people raise all the usual issues: First, leverage is back around 2007 levels (Slide 3). Moreover, there is less subordination beneath senior secured loans and this, in turn, may lead lower recoveries once defaults actually occur. There also continues to be considerable chatter about “covenant lite” loans – but perhaps this focus is misplaced. While “covenant lite-ness” reduces lenders’ ability to drive borrower behavior or hike spreads upon covenant violations, it also arguably gives borrowers breathing room to fix companies if things go awry. The default and recovery data simply isn’t robust enough to determine how covenant lite companies perform under duress. (Shameless plug: More research on covenant lite recoveries may be on the way.)

We’ve also discussed the loosening documents in these pages (here and here). It is true that EBITDA adjustments are up, incremental debt is more accessible and borrowers have more ability to transfer assets away from the lender group. None of this is likely to improve recovery given default. Still, recovery isn’t as relevant until there are defaults – and no one sees defaults surging in the near term. There are not obvious sectoral pressures: We’re presumably through oil & gas and mostly through retail defaults. Institutional loan maturities don’t pick up materially until 2023, according to LCD. And interest coverage ratios remain very strong – though a significant increase in interest rates may erode them. So while recoveries may be lower, we’ll have to wait until defaults pick up to really know.

While this is what people focus on, perhaps it shouldn’t be. The big difference between today and 2007 probably is systemic risk – and we would argue that it is much lower. 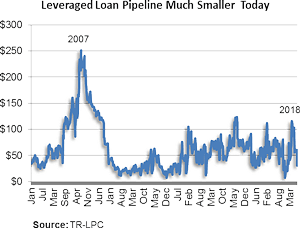 The loan market does business differently now and that should – emphasis on should – mean that it is sturdier today. First, loans are underwritten differently. Banks got religion on pipeline risk – as well they should have. As the COW I shows, leveraged loan pipelines  were vastly higher in the pre-crisis period. In 2007, there were periods when the TR-LPC’s Leveraged Loan Pipeline hit $250 billion. Today, banks are very focused on distributing risk; while pipelines have been increasing, they have averaged less than $60 billion this year. Sinclair Broadcasting is a very current poster child of this trend. Last year, it sought a $3.75 billion term loan B to support its acquisition of Tribune Media. Last week, the acquisition was terminated – but the loan was long since out of the underwriters’ hands.

A second major difference between today and pre-crisis days is a decline in “mark-to-market” (MTM) leverage. In 2007, there were many more MTM loan investors. When loan prices began to really decline – in part as banks with too much pipeline exposure were forced to sell – the MTM investors started getting margin calls and had to sell as well. As prices dropped, more margin calls were triggered. This drove a spiraling of prices in the leveraged loan market – see COW II – that only ended after the MTM leverage was wrung out of the system. 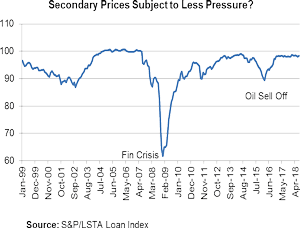 Today, there are far fewer MTM leveraged investors in the loan market, and this dramatically reduces the probability of a price decline a la 2008. Of course, underwriters can still be “long and wrong”, but that is different than systemic weakness. As COW II also shows, in late 2015/early 2016, the oil & gas weakness hit at the same time that banks had a significant pipeline; some underwriters had to sell loans well through fees and secondary prices did fall below 90. But as painful as that might have been to individual underwriters, it was not a systemic shock.

So, at the end of the day, we don’t disagree that credit terms have gotten looser after eight years of recovery. But we would remind readers that the biggest driver of 2008 was systemic risk, not credit risk.