December 7, 2017 - Two-thousand and seventeen has been quite a year for financial sponsors – at least by the stats. As Thomson Reuters LPC reported (and charted), U.S. lending to private equity companies hit a record high of $588 billion by the end of November. As the LSTA Chart of the Week (“COW”) indicates, this is 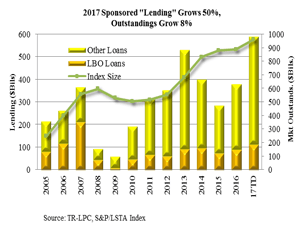 50% higher than 2016 levels. Perhaps more impressive is that PE lending already is 11% higher than 2013’s full-year record of $530 billion. While those are astonishingly high numbers – and the year is not quite over – there’s less here than meets the eye. As TR-LPC observes, 81% of that remarkable volume comprises repricings and refinancings.

Still, even with those repricings, real volume did come on line this month. Outstandings in the S&P/LSTA Leveraged Loan Index (“LLI”) increased by $14 billion to $961 billion (including unpriced loans). As the COW also demonstrates, LLI outstandings are up 8% this year. Outstanding sponsored loans in the LLI increased 11% to $558 billion, according to S&P/LCD. While this is a material increase, it’s far short of the headline “50% increase in sponsored lending”.

Regardless, by whatever metric one uses, lending is up. But what about credit quality? In previous missives, we (and everyone else) have chronicled the deterioration in loan documentation.  In the future, this may increase default rates (because more debt can be added to companies’ balance sheets) and decrease recovery (because collateral can be shifted out of companies). However, with default rates so low, it’s been hard for lenders to push back.

But last month, default rates jumped. A bit. S&P/LCD saw the default rate in the S&P/LSTA Index climb from 1.51% in October to 1.95% in November on the back of four defaults. With a different dataset, Fitch tracked seven defaults, bringing default rate to nearly 2.4% – close to their full-year forecast of 2.5%.  Energy and retail, unsurprisingly, are big players in these numbers. The energy default rate is approaching 15%; it should end the year around 17% and remain in the double digits next year. The retail default rate has topped 8%, and is expected to be in the 10% context at year-end and in 2018. Of course, the biggest slow-motion default is iHeartMedia. It – along with more than $6 billion of its loans – is expected to default in first quarter, driving default rates to a 32-month high.

Is there a common culprit? Both the retail sector (generally) and iHeart (specifically) point to tech disruption as the reason for their decline.  Indeed, outside of energy, disruption is the biggest trend that has lenders (and sponsors) concerned. And this is not just an American worry, TR-LPC concludes. According to a London-based global co-head of financial sponsors coverage, the first question in every credit committee meeting is “What’s Amazon doing?”