August 7, 2017 - Last Wednesday, the Shared National Credit (“SNC”) Review, which assesses credit risk trends in the syndicated loan market, was released. The headline was that riskiness has declined somewhat in the $4.3 trillion portfolio of loan and loan commitments. While that’s fine news, more interesting fare emerged from a deeper dive. To wit, the near-doubling of the leveraged loan portfolio and a warning about how post-close usage of incremental facilities could trigger non-pass originations.

Before discussing these more interesting trends, we’d note that the amount of non-pass credits – those considered “special mention”, “substandard”, “doubtful” or “loss” dropped by $3.9 billion to $417.6 billion. This brings the share of non-pass credits down to 9.7% of the total SNC portfolio.

On the first point, consider Exhibit 4 on p. 6. It shows that the size of SNC Leveraged Lending Commitments soared by $792 billion (or 82%!) to $1.76 billion. The obvious question: What the heck is going on? The following paragraph, though, explained that near-doubling of the leveraged loan portfolio was primarily due to banks “recalibrating leveraged loan definitions to meet regulatory expectations of committed senior debt above three times EBITDA or committed total debt above four times EBITDA, except in industries or sectors where banks have documented appropriate reasons for other leverage levels”.

In other words, banks’ definition of “leveraged” changed. This is rather important. Our members have noted that the leveraged lending guidance has forced banks to classify many investment grade or near-investment grade companies (with senior leverage over 3x or total leverage over 4x) as leveraged companies for the purposes of the guidance. Why does this matter? To begin, it involves considerable costs for banks. 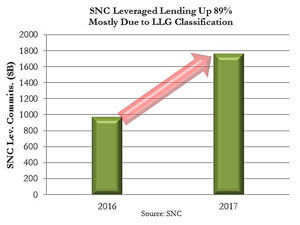 There were significant initial MIS outlays to capture investment grade “leveraged” deals, and the ongoing reporting costs are non-trivial. But more serious may be the impact on banking decisions. First, including a significant number of investment grade loans in a “leveraged” portfolio can skew banks’ risk analyses. For instance, that $700 billion-plus of previously non-leveraged loans probably have a lower default probability than truly leveraged credits. Thus, adding them into “leveraged” portfolio could reduce the “leveraged” portfolio’s default probability. That doesn’t help banks’ risk analyses. In addition, banks set risk limits based on their portfolio size. We have heard that the addition on “non-leveraged” loans has filled some banks’ leveraged loan limits, perhaps reducing their ability to make actual leveraged loans.

So how are banks dealing with this? We have heard that the more sophisticated banks have created “real” leveraged loan sub-limits within their leveraged loan portfolio, and use this data to create their risk analysis and lending limits. Thus, the inclusion of non-leveraged loans in the leveraged portfolio may, at best, be counterproductive and, at worst, be something that could artificially constrain financing.

Moving on to the “true” leveraged lending portfolio, the SNC Review also offered up some interesting morsels. First, during the 3Q16 and 1Q17 Review, there was a de minimus amount of non-pass underwritings. In contrast in 2014, there were more than 90 non-pass underwritings.  Likewise, in the current SNC Review, 30% of leveraged loans were levered 6x or greater vs. 42% in 2014. (Do note that this also demonstrates that the 6x debt/EBITDA is not a bright line for non-pass status; rather regulators’ focus is on whether the borrowing company can show the ability to repay all senior secured debt or half of total debt from base cash flows in five to seven years.)

But don’t relax yet. The SNC Review also warned about weaknesses in underwriting standards, including ineffective covenants and liberal repayment terms. But it particularly emphasized incremental debt provisions. It points out that usage of incremental debt facilities shortly after funding may result in risk rating downgrades and non-pass originations. It further warned banks to exercise caution during underwriting to prevent incremental provisions from resulting in non-pass originations.