April 12, 2018 - SOFR – a potential LIBOR replacement rate – is now more than a week old. What have we learned, what are the early challenges, and what are our members saying? We briefly discuss each of these issues below. But on April 24th, we will dive into these issues more extensively at the LSTA Operations Conference. Importantly – nay, critically – at the conference we will begin to dissect the operational challenges of a potential new (and very different) reference rate.

First, some brief background. LIBOR is increasingly fragile. After the financial crisis, banks mostly stopped funding themselves in the interbank (LIBOR) market. Thus, banks aren’t really lending or borrowing at LIBOR and, in turn, there are few actual transactions.  (Like $500 million a day for 3-month LIBOR; that’s less than the US syndicated loan market trades.) Meanwhile, due to very large fines (and some jail time!), banks are nervous about quoting LIBOR rates when they cannot see actual transactions. But because the financial markets rely on LIBOR, regulators are compelling banks to submit LIBOR quotations … until the end of 2021. After that, banks may or may not submit LIBOR quotations and LIBOR may or may not continue.

What might replace it? SOFR – the Secured Overnight Financing Rate – may the most likely candidate. The Federal Reserve Bank of New York began publishing SOFR on April 3rd (albeit potentially with a few hiccups). As the LSTA Chart of the Week demonstrates, SOFR started off a bit volatile, but has settled down into the 1.75% context over the past few days. Perhaps somewhat unexpectedly, it’s also a higher than overnight LIBOR. 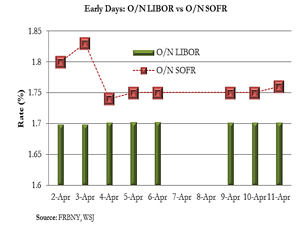 Why might this be surprising? SOFR differs in many respects from LIBOR. First, SOFR is a secured, risk-free rate, whereas LIBOR includes an embedded bank credit risk element, effectively making it a proxy for bank cost of funds. Second, SOFR is only an overnight rate, whereas LIBOR is a term rate, with options ranging from overnight to one year. This means that the development of both a term reference rate and a bank credit risk spread are key pre-conditions to SOFR becoming a functional bank loan rate. The importance of these issues to the loan market was detailed in the FT and Bloomberg this week.

In addition to press coverage, loan market participants are paying attention and beginning to take stands. To wit, a number LSTA buyside members recently published commentary on the possible transition from LIBOR. After bringing readers up to date, BlackRock Viewpoint flagged a number of key issues that are not yet being discussed elsewhere. Usefully, they detailed how they themselves are organizing to address a LIBOR transition. Their to-do list includes: i) internal education, ii) evaluating existing LIBOR exposures, iii) compressing existing positions to reduce exposures, iv) reviewing fallback language in existing documentation, and v) analyzing systems readiness.

While not underestimating the challenges of a transition, PGIM took a stand, stating that “[w]hile LIBOR has become synonymous with the cost of borrowing, the time has come for a replacement benchmark interest rate.” PGIM further identified critical developments that must occur before SOFR could become a legitimate reference rate for loans. As mentioned above, SOFR is an overnight rate and the loan market requires a term curve (e.g., at least one- and three-month levels). Moreover, SOFR is a secured, risk free rate, whereas LIBOR contains bank credit risk and is correlated to AA/A bank credit spreads. PGIM argues that, because of this, any SOFR reference rate would also need a bank credit spread component (and ideally a “dynamic” spread component as the relationship between SOFR and LIBOR can vary dramatically, as a recent LSTA COW demonstrated).

Putting on their communications hat, Eaton Vance has swung into gear explaining the coming (potential) LIBOR change to its mutual fund clients and describing why – if done right – it’s not a problem.

We echo the desire that, if done right, a transition from LIBOR need not bring the apocalypse upon us. So what do we need to do? First, there are strong odds that LIBOR will last at least until the end of 2021 because the regulators will compel banks to continue submitting the rate. Whether it lasts well beyond 2021 is unclear, but even the potential of cessation means that market participants must prepare for it. This means: i) reviewing LIBOR fallback language in existing documentation and incorporating new, more robust fallbacks, ii) working with industry bodies and regulators to develop term curves and bank credit spread adjustments for SOFR, iii) developing new draft language for SOFR borrowing options in loan and CLO documentation, iv) determining what changes need to be made to bank systems to adopt a new reference rate and v) executing those changes. Time is ticking and there’s a lot to do.

The LSTA is a member of the ARRC Committee and is co-chair of the ARRC Business Loans and CLOs Working Group. For more information, contact mcoffey@lsta.org or tvirmani@lsta.org.