November 14, 2017 - On November 9th, a week after the House released its tax reform bill, the Senate released its bill. To be sure, getting any bills through Congress has been challenging this year. But if tax reform as proposed passed – and Gary Cohn on Tuesday reiterated that it would – it could dramatically impact the U.S. tax system and tax payers.  Replacing our homeowner hat with our LSTA hat, we spent some time pondering the impact of the tax bills on the corporate loan sector – and the LBO subsector in particular. We focus on the intersection of interest deductibility, lower corporate taxes and expensing of capex. While this is far from simple, we fortunately got some help along the way from Barclays, CreditSights, Moody’s, Akin Gump and Debevoise.

First, conceptually, Barclays research indicates that lower tax rates tend to reduce corporate leverage, as debt becomes more expensive relative to equity. If one adds in a reduction in interest deductibility, debt may become still less attractive to many corporates. Thus, theoretically, the overall trend could be toward deleveraging.

There are some other nuances in the bills. First, by using EBIT (rather than EBITDA) in the interest deduction calculation, more income would become taxable under the Senate bill. Second, the Senate delays the corporate tax cut until 2019. Thus, in the Senate proposal, taxable income is higher and there is a full year when interest deductibility is reduced and the tax rate isn’t reduced. Moreover, neither bill suggests that existing debt would be grandfathered.

So, both bills increase taxable income. However, at the same time the tax rate decreases to 20% and capex can be expensed immediately. Thus, it’s not clear whether companies’ taxes themselves will increase or decrease.

So let’s turn to the leveraged and HLT borrower space. Ceteris paribus, by capping interest deductibility, companies with interest expense more than 30% of EBITDA (or interest coverage ratios of less than 3.3x) likely will see more taxable income. The question is i) how big is that universe of companies and ii) will their increase in taxable income be counterbalanced by lower corporate taxes and capex expensing? In reality, a number of leveraged companies may be affected. According to Barclays and S&P/LCD, 32% of 2017 leveraged companies have EBITDA/cash interest of less than 3x. (The 3.3x ICR cut is not easily accessible.)

The biggest impact is likely to be the sponsored space, where companies have higher leverage ratios, lower interest coverage ratios and – anecdotally at least – pay less taxes. LCD data and the Chart of the Week 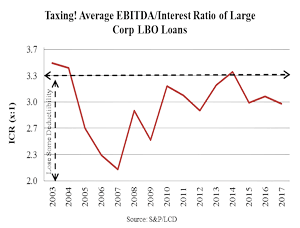 show that in most years, most new LBOs have EBITDA/cash interest ratios below 3.3x. (And, more companies would fall under that threshold if EBIT/interest is the metric.) This suggests that LBOs are likely to have more taxable income if tax reform passes. The question, then, is whether their higher taxable income is counterbalanced by lower taxes and immediate expensing of capex. If not, LBO math – which was already difficult considering high purchase price multiples, capped leverage and high equity contributions – might become more challenging.

October 5, 2022
October 5, 2022
October 4, 2022
October 4, 2022
October 4, 2022
The LSTA, the trade association for the corporate loan market in the United States, has promoted of three legal executives to pave the way for increased…
October 3, 2022
Please find attached the September 2022 LSTA/Refinitiv Mark-to-Market Pricing File.
October 3, 2022
Please find attached the 3Q 2022 LSTA/Refinitiv Mark-to-Market Pricing File.
September 30, 2022
This week we cover Secondary Eye (of the Storm?); CLOs - Pondering Futures; Revlon En Banc; Advisory!
September 29, 2022
We had previously riddled the question: How could CLO AAA spreads and CLO issuance both be around record levels. Well, riddle this no more.
September 28, 2022
Though September has been challenging – to say the least – late summer was relatively uplifting in the secondary.