April 19, 2018 - On April 3, 2018, the New York Federal Reserve Bank (FRBNY) began publishing SOFR, the Secured Overnight Financing Rate, which is a potential replacement for LIBOR. Unfortunately, shortly thereafter, the FRBNY determined that the volumes of SOFR trades – around $850 billion daily – appeared too high. In reviewing the data, they determined that forward-settling overnight Treasury repos had inadvertently been included in the data. So, earlier this week, the FRBNY published the corrected data – and we are doing so as well in the nearby chart. 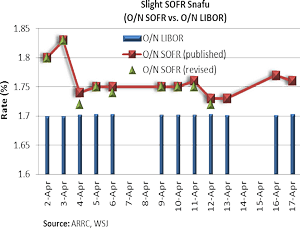 On three of the nine days that the erroneous data was published, the correct SOFR would have been one basis point lower and on one day, it would have been two bps lower. There was no difference on the other five days. Thus, while the early SOFR stumble made headlines, in reality there was not a material difference in the actual SOFR rates on those days. (Though, frankly, we were glad it was caught this early.)

So what does this have to do with us? There are $4 trillion of syndicated loans and $500 million of CLOs that may well need to transition from LIBOR to SOFR over time. At the LSTA Operations Conference next week, we will be discussing the efforts (and challenges) around a potential move to SOFR. It is important to understand that SOFR is very different than LIBOR and thus will behave differently than LIBOR. First, SOFR is a secured risk-free rate, whereas LIBOR is an unsecured rate and incorporates a “bank cost of funds” concept. For this reason – and as discussed here – LIBOR tends to gap out in periods of credit stress, while SOFR will likely be flat and perhaps even decline. Thus, market participants are discussing the potential need for a bank “credit spread adjustment” to equalize LIBOR and SOFR. Second, SOFR currently is only an overnight rate. However, there will be considerable work in the coming years to develop a term structure for SOFR, so that it also will have a three-month option. In the Ops Conference, we will discuss these looming changes – and what it may mean to operationalize all of it. (By, we might add, the end of 2021!)

The LSTA is a member of the ARRC Committee and is co-chair of the ARRC Business Loans and CLOs Working Group. For more information, contact mcoffey@lsta.org or tvirmani@lsta.org.

May 23, 2022
May 23, 2022
May 23, 2022
May 23, 2022 - Last week, the LSTA submitted an amicus brief to the US Court of Appeals for the Second Circuit (2nd Circuit) arguing…
May 20, 2022
This week we cover CLO Stats & Perspectives; CLOs & Latest SEC Threat; LSTA Documents - (Re)Visionary!
May 19, 2022
The markets have been moving hard…have CLOs been a bastion of stability? The LSTA’s Meredith Coffey discusses both the price movements and the fundamental stability…
May 19, 2022
Another threat to CLOs? The SEC’s novel interpretation of an old rule, 15c2-11, could cause problems for broker dealers and issuers of CLOs and disrupt…
May 19, 2022
This page will focus on insights and commentary from our Partner, FitchRatings.
May 18, 2022
The LSTA continues to add to its suite of documents that is made available to all members on its website.
May 16, 2022
May 16, 2022
The Loan Syndications and Trading Association (LSTA) recommends treating Monday, May, 30, 2022 as a loan market holiday.